Thanks to a darling co-worker who knows how much I love spending money on fabric, I learned that two designer fashion labels were hosting a sample sale in early May in Antwerp (Belgium, of course! About 45 minutes from where I live). It was specifically advertised that they were selling fabric (in addition to clothes, of course), which really piqued my interest. Some Googling led me to find out that this was something of a city-wide event for designer labels in Antwerp, called Belmodo Fashion Days.

(I’m not too fluent in fashion history, but Antwerp is quite a hub for designers, labels, and fashion houses; check out the Antwerp Six if you want to learn more!)

From what I can tell, it seems like it’s only one week per year, but the specific dates are announced as early as January/February, and then they have handy maps and lists of who’s participating closer to the event. (The site is in Dutch/French, but the map itself is in English.) The main bummer moment was realizing that Dries van Noten had their fabric sales a couple weeks prior to the main sample sales, and was only selling clothes at the time I went. I’ve already set a calendar notification for next April to not miss out!

I don’t work on Fridays, so I made a game plan to hopefully skip the weekend crowds and explore the city kid-free. I made a list of stores that mentioned selling fabric, checked out their websites to try to get an idea of what fabrics might be available, mapped them all out (Google Maps lets you make “my places” maps with custom pins on them) and decided which stores I wanted to visit based on location/priority. Then I added walking directions from the Centraal Station, downloaded it as an offline map, and I was ready.

I had no idea what to expect, but it turned out to be an overall good experience!

The amount of fabric for sale varied wildly from store to store. One store had 5 or 6 low rolls stuffed in a random corner. Another, had an entire large room for just fabric, separate from a large room for the clothing sale. So yeah, the takeaway is, big labels might have more on offer but it’s a (fun!) game of chance as to what you’ll find.

The variety of fabric types also differed from store to store. This is where it’s good to check out current/past collections from the designers’ websites to get an idea of what might be for sale. I decided against visiting some stores because literally everything they sold was prints or colors that I wasn’t a fan of. Generally, everything seemed to be of a nice quality though. Silks, silk-blends, natural fibers, and similar. I was a bit surprised at how many sheer fabrics there were, at nearly every sale I went to, plus a lot of fabrics with a stiff hand, and a lot of shiny fabrics. Like, satin sheen, or some sort of lurex blend, and while they were beautiful (some were downright mesmerizing), I couldn’t justify buying something so shiny for my lifestyle. There were also some crazy prints, like a blush pink scuba with leopord-print flocking, and olive green on the reverse. Super unique, but I couldn’t see it fitting into my wardrobe!

Prices were amazing. I’ve bought designer deadstock fabrics before (there’s another monthly fabric sale in Belgium that pretty much only sells ex-designer stock) and compared to those, the prices at the Antwerp sales were a great deal. For bigger stores, the rolls were labeled with a colored sticker, and there were signs around the room to let you know the red sticker meant $5 per meter, etc. The most I paid was $15 per meter, and that was for silks or silk-blends. One store advertised $20 per meter fabric, but I didn’t actually see any at that price. Most of what I bought fell in the $5-10 per meter range. It might also be useful to know that some shops only accepted cash, some only accepted cards, and some took both.

Obviously these were not typical fabric shops though, and the people working at the sales, while they were all perfectly nice, varied in their preparedness for selling fabric. Most stores did not have labels for fabric content and the employees generally didn’t know what the content was. Some didn’t have space for unrolling and cutting fabric, and used their arm-span to eye-ball the length of a meter. Some, when it was clear that I was close to buying the end of a roll, just threw in the extra for free. Some were more precious about setting it aside as a separate coupon. Most of the pieces have some chunks missing for swatches, I saw some fabrics labeled as being “irregular” of having a defect of some sort, and most had bits of masking tape still stuck to them.

Here’s where I went and what I bought. My rule for the day was: go for solids over prints, neutrals over accent colors, and try to come up with a reasonable idea for what it could be used for. If I found myself stroking fabric and just thinking, “I don’t know what I’d make with this, but it’s so lovely!” then I needed to put it down and walk away. 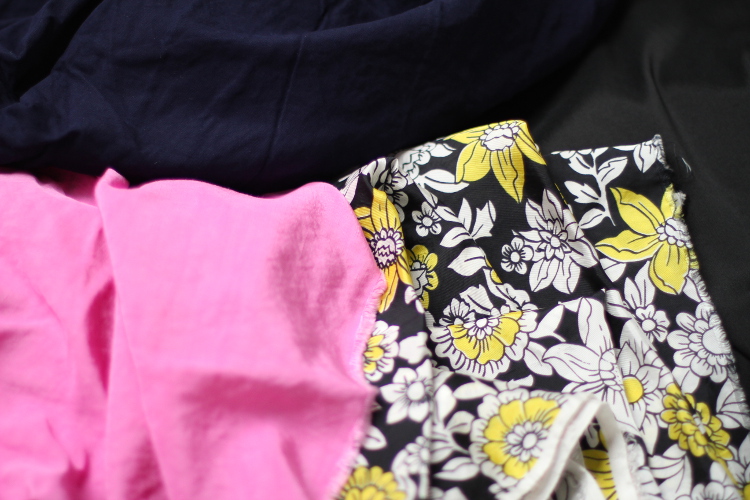 Christian Wijnants: Looking at his website, most of the fabrics on sale seemed like they were from Pre-Fall 16 through Summer 17.
Pink viscose/cupro: Such an intriguing shade, like a cool pink. It’s opaque and has a nubby texture on one side. It’s fairly firm, but I think a summer cami would be wonderful. I bought 2 meters for $14.
Black silk: 100% silk, slightly sheer, slightly stiff, and it has a secret chevron pattern that you can only see when the light hits it right. I don’t know how to explain it, because it’s not printed and not pressed onto it? I bought 2 meters for $30. Okay, so I don’t have a definite idea for this, but a top of some sort.
Navy stretch cotton: This is pretty heavyweight; one side is flat and the other side has a similar nubby texture as the pink fabric. I bought 3 meters (for $15) with an idea for either a transitional spring coat (unlined, no closures, no hood, etc.), trousers, or something crazy like a jumpsuit (like the India from Wear Lemonade)
Black, white, chartreuse floral: this was my crazy print choice, because there were a bunch available, but I loved this one most. My first thought was a button-up shirt or a shirtdress (either short-sleeved or sleeveless). I bought 2 meters for  (I don’t think I have enough for a jumpsuit like they sold a few seasons ago, but can you imagine!?)

Ann Demeulemeester/Haidar Ackerman
Navy/white striped shirting: this is a pretty thin cotton. I got nearly 4 meters for the price of 2 since it was the end of the role, so I paid $20. I’ve already used most of this for a pattern test (that I can’t wait to show you!).
Black knit: Impossible for a photograph to show the quality here, but it’s super stretchy, great recovery, and just feels amazingly smooth. The sales guy didn’t know what it was made out of (“probably a cotton-blend” he said), but it reminds me of pantyhose. It doesn’t curl and it’s doesn’t have a lot of compression, as in, it’s going to stretch with you, not hold you in like Spanx. My immediate thought was to make bodysuits (like, fabulous lingerie bodysuits) that I could wear under sheer tops. I was going to buy 1 meter, but then the sales guy offered to give me 3 meters for the price of one?! Umm, yes? Of course? 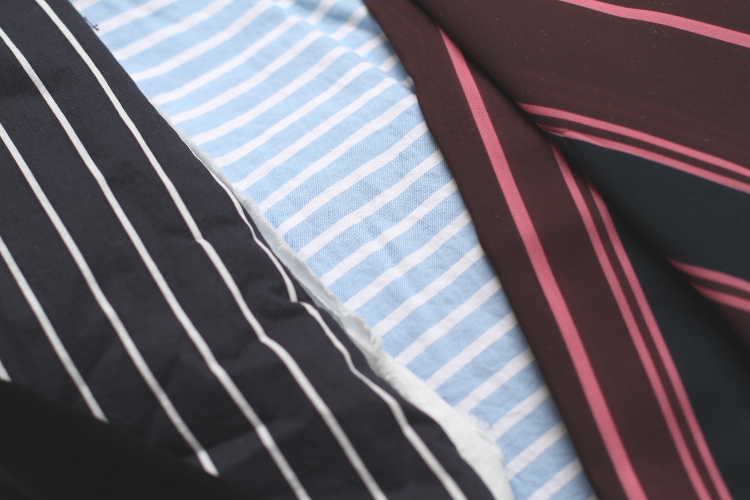 Honest by
The selection was limited (maybe a dozen rolls leaned against a wall) but everything was $5 per meter, with each roll priced out too. I nearly swiped a +40-meter roll of shirting for $75, just because of what a deal it was, but reality set in and I remembered I had no way to transport it!
Purple plaid (two photos above): I had an immediate vision of a Colette Phoebe with a fuller skirt, to wear over black tees and turtlenecks in the Fall/Winter. I bought 3 meters to make this happen (which, on second thought, is probably too much oops!).
Light blue/white striped shirting (pictured in the center, above): This was politely asking to become a button-up or a shirtdress.
Oatmeal linen (pictured below on the left): I made a quick decision to grab a meter of this to make a boxy summer top (this might finally push me over the edge to buy the Kabuki Tee pattern by Paper Theory).

Mooiloop:
Burgundy-pink-navy stripe (pictured on the right): I only bought the one piece from this shop. On their website I saw a lot of interesting prints, but in person they didn’t click with me. Something about the colors or the print or the size of the print, just wasn’t speaking to me. I bought a remnant of this sheer, striped stuff (no tag, no label, nobody knew what it was made out of) that measured about 1.5 meters for $10. 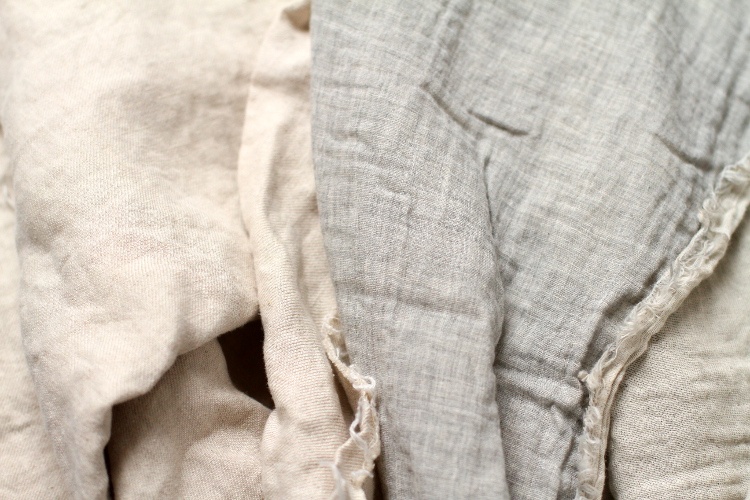 Annemie Verbecke
This shop only had a few rolls available, but I couldn’t resist 2 meters of buttery soft double-gauze (pictured on the right), which I was told was a silk-blend. They were selling pants made with this fabric, which surprised me as it feels so delicate. For me, I’m thinking a floaty dress or top.

Phew! Needless to say, my backpack was pretty full by the time I got back to the train station, but I’m so pleased with how the day went. I managed to get some quality pieces and already have some specific projects in mind for most pieces. What about you, are there any similar events in your area? Have you ever bought fabric from the designer themselves? Would you go to Belmodo Fashion Days in the future (or have you been in the past)?