I had considered skipping October’s #sewmystyle2018 patterns, a selection of tote bags from Klum House. I already have a couple purses and bags that I love, plus we have a couple canvas tote bags floating around the house, reusable grocery bags, etc., etc., etc. Did I need another bag? 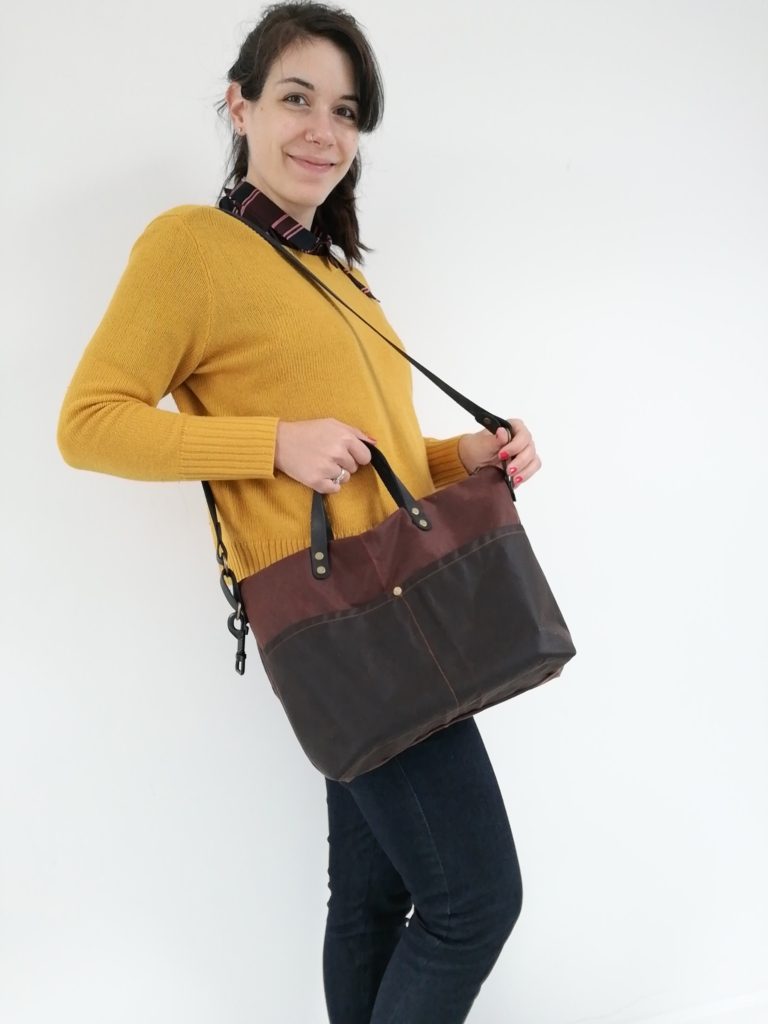 But it only took a few minutes browsing the Klum House website to realize that yes, I did indeed want one of those bags.

I had tested Sarah Kirsten’s Clematis Tote bag pattern over the summer (you can see my version here), and it was so quick and satisfying to sew up, so perhaps the bag-making bug has bitten me after all! 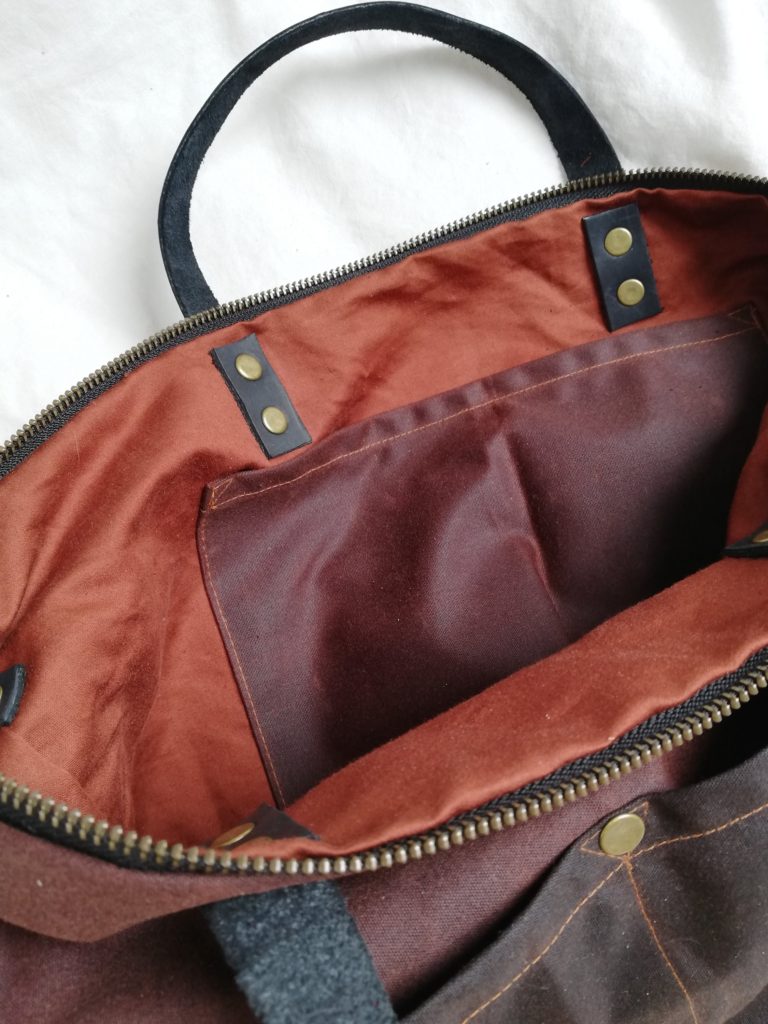 I found the instructions were clear overall. The process was pretty straightforward, and for any steps that needed more visuals, Klum House provides video instructions. My bag came together in only two days (of lazy afternoon sewing). 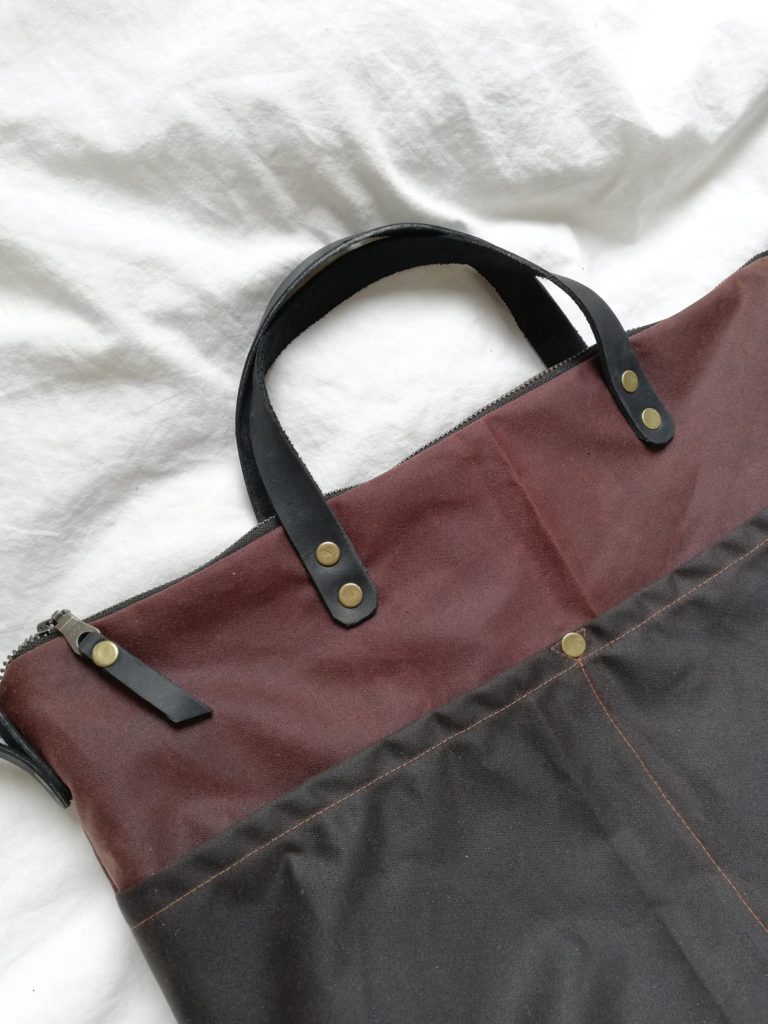 By far, the most time-consuming part was trying to source all of the necessary materials and notions. These won’t be things that you happen to have around the sewing room if you’re more of a garment sewist. I scooped up two shades of brown waxed canvas from a destash sale, and used the darker shade for the exterior pocket. The lining is a simple crisp cotton in a rust shade. The black leather straps, zipper, D- and O-rings all came from K-bas.be, a Belgian-based bag supplies shop. The rivets and Chicago screws came from Doemaardie (although it turns out that K-bas also carries rivets and Chicago screws, so I could’ve saved on shipping!). 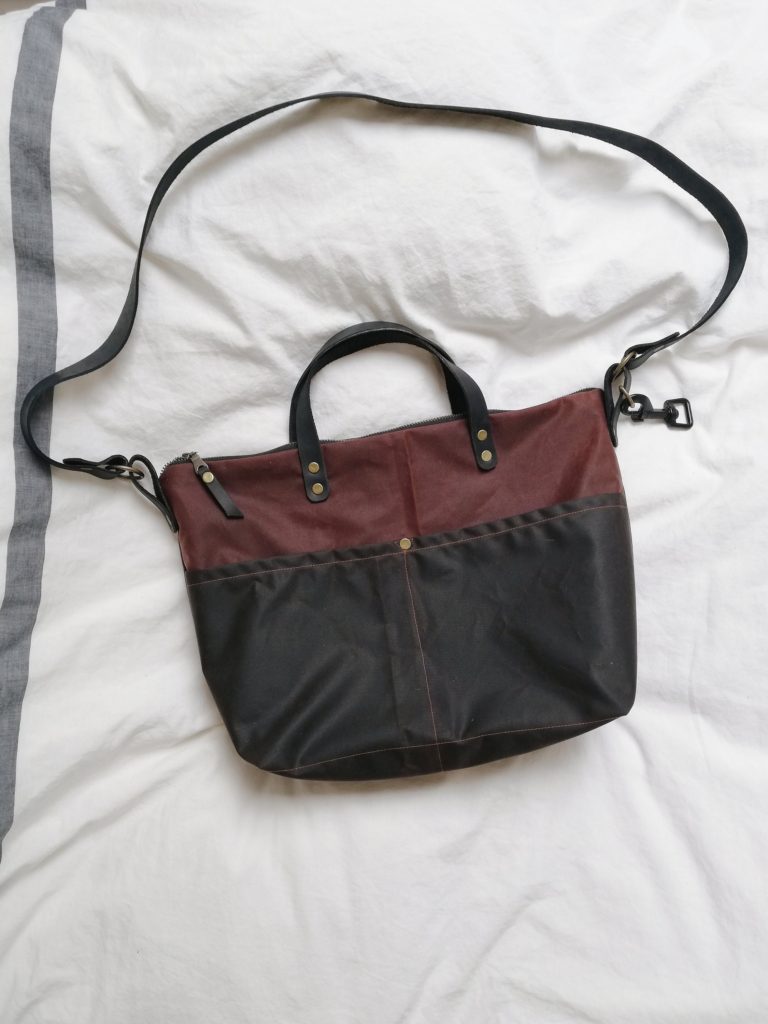 I made a couple changes to my Fremont, all of them by accident (oops!): 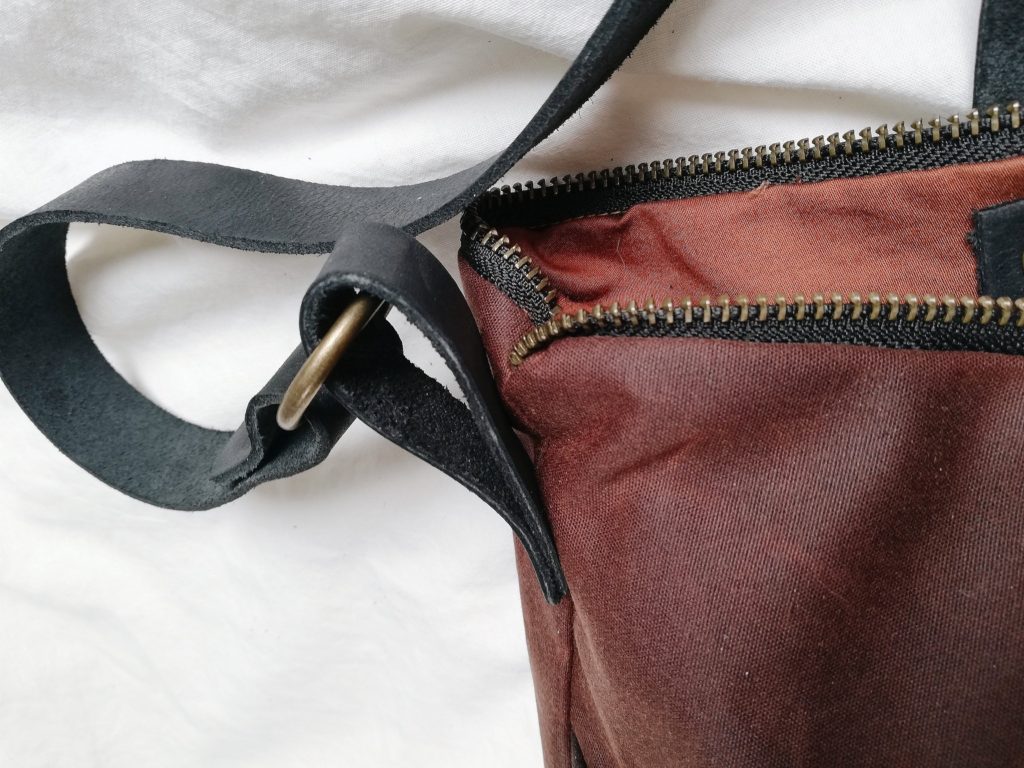 The main issue with the longer zipper is that it caused the zipper ends to go fully into the side seams of the bag. This isn’t such a big deal for the functionality of the zipper. One end did get sewn a bit awkwardly, so if you look closely, it doesn’t line up nicely. That doesn’t bother me so much. But, when it came time to attach the O-ring tabs, it meant I couldn’t install them in the instructed way. After I had punched holes in my leather straps and my bag, and installed the tabs and Chicago screws, I realized that I couldn’t zip the bag closed!

I was terribly bummed at first and thought that there was no way to resolve it without taking apart the whole bag and shorten the zipper, redo all of it, and then install the O-ring tabs (and the cross-body strap) correctly.

But!!! Luckily I didn’t have to do that.

I don’t know about everybody else’s experiences using the Chicago screws, it was my first time using this type of hardware and they didn’t feel secure. I couldn’t get a tight fit with the screws, and once I realized that I had messed up attaching the O-ring tabs, I didn’t think the strap would last long if I kept up with the Chicago screws. I was already imagining Future Kirstin getting super annoyed at Past Kirstin if the Chicago screws came undone and the strap fell off. 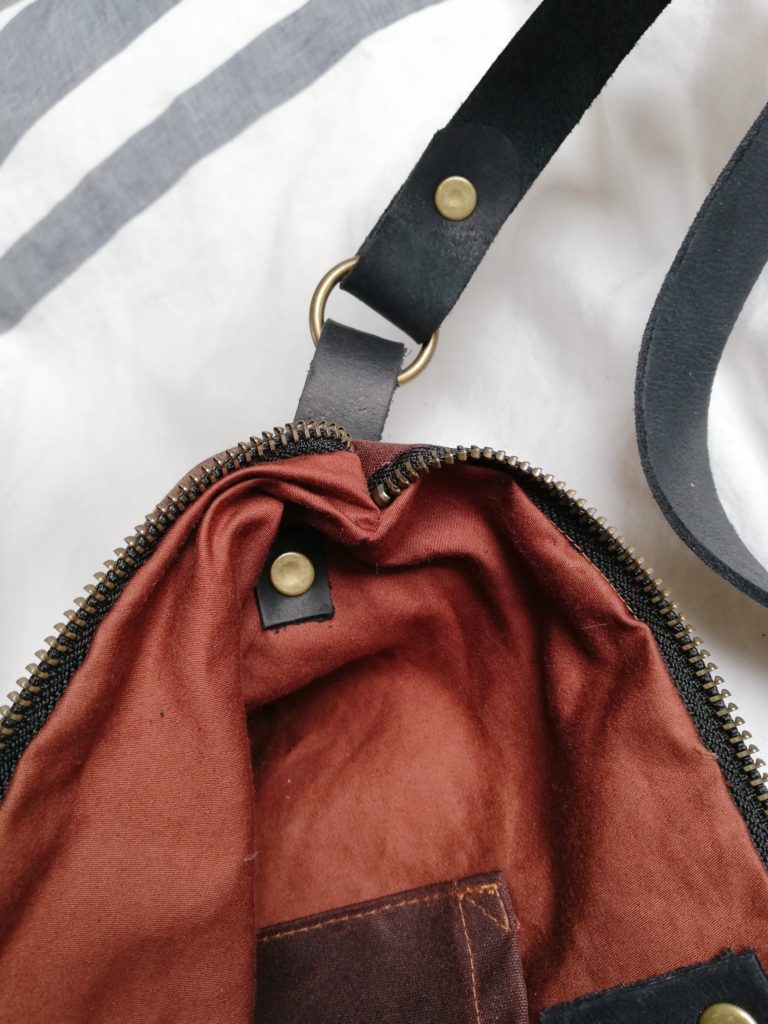 So, aiming for stability, I decided to use rivets so I could whack the sh*t out of them and really smush everything together. The holes that I punched for the screws were way bigger than the ones I used for the rivets though, so I cut a leather washer to use on the inside for more stability. 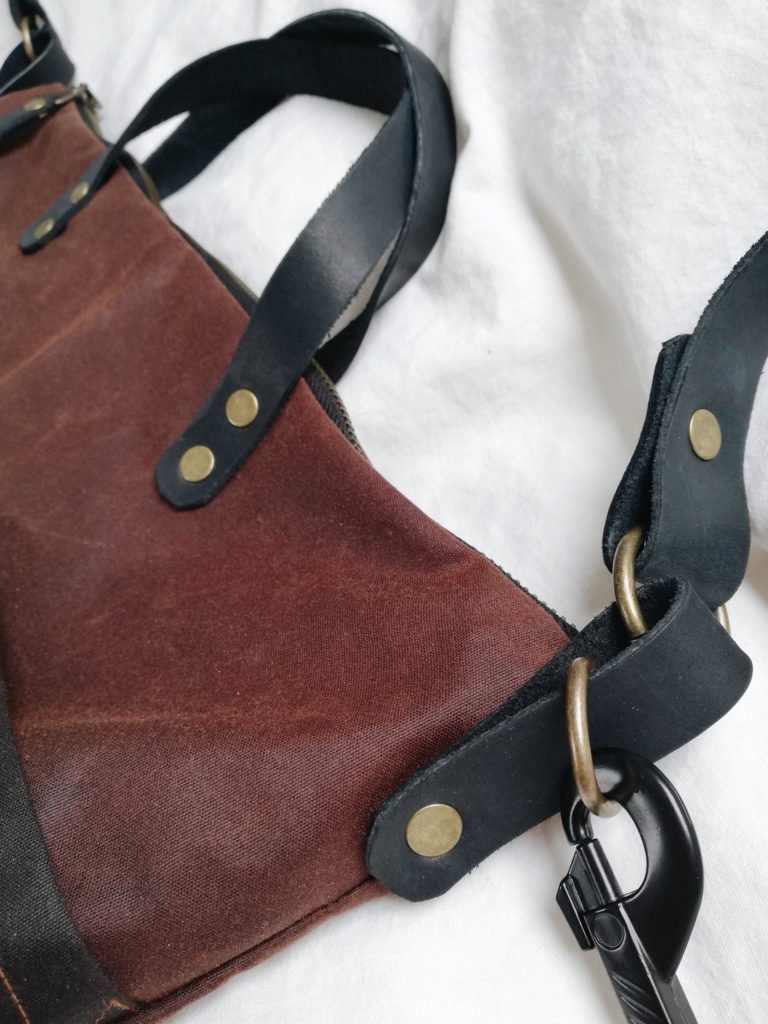 Then, instead of looping the O-ring tab around the side seam, I put both ends on the outside. When prepping to hammer the rivet, I made sure that the O-ring tabs were positioned straight up and down, because they can’t be adjusted afterwards. 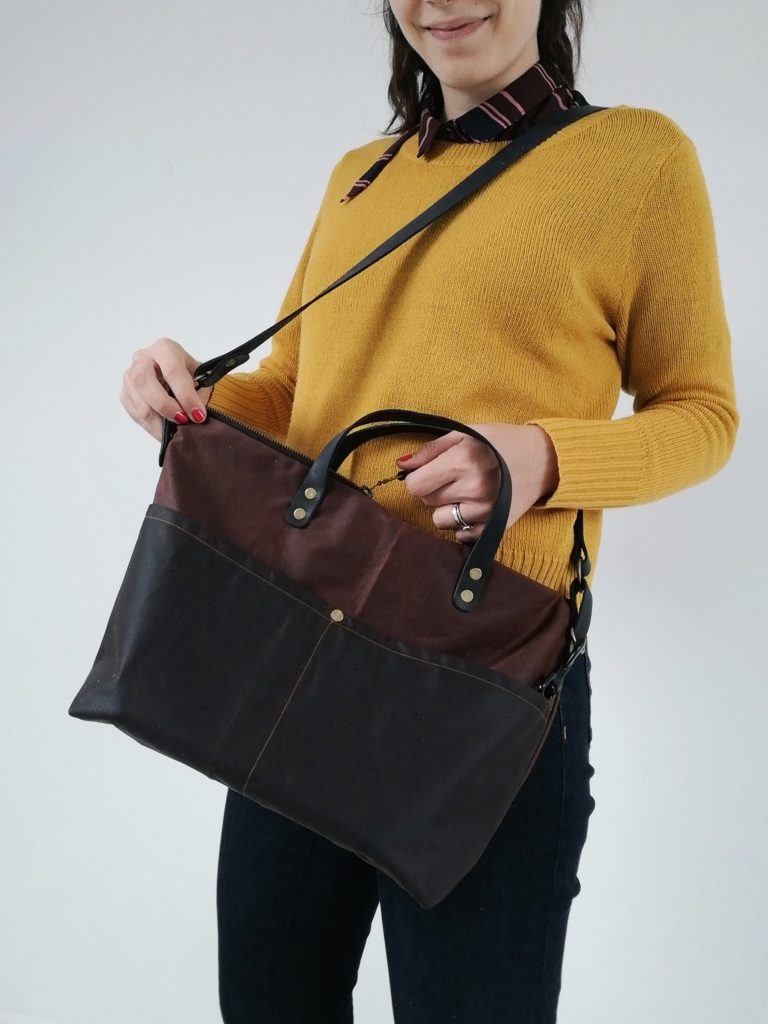 I love how it turned out! The end result is so satisfying and looks really professional. All of the hardware and the leather straps really gives it something extra, plus the little details like the interior pocket and the zipper pull are really thoughtful additions. I could see myself using this pattern again in the future to make a gift, plus I still have a ton of waxed canvas leftover. 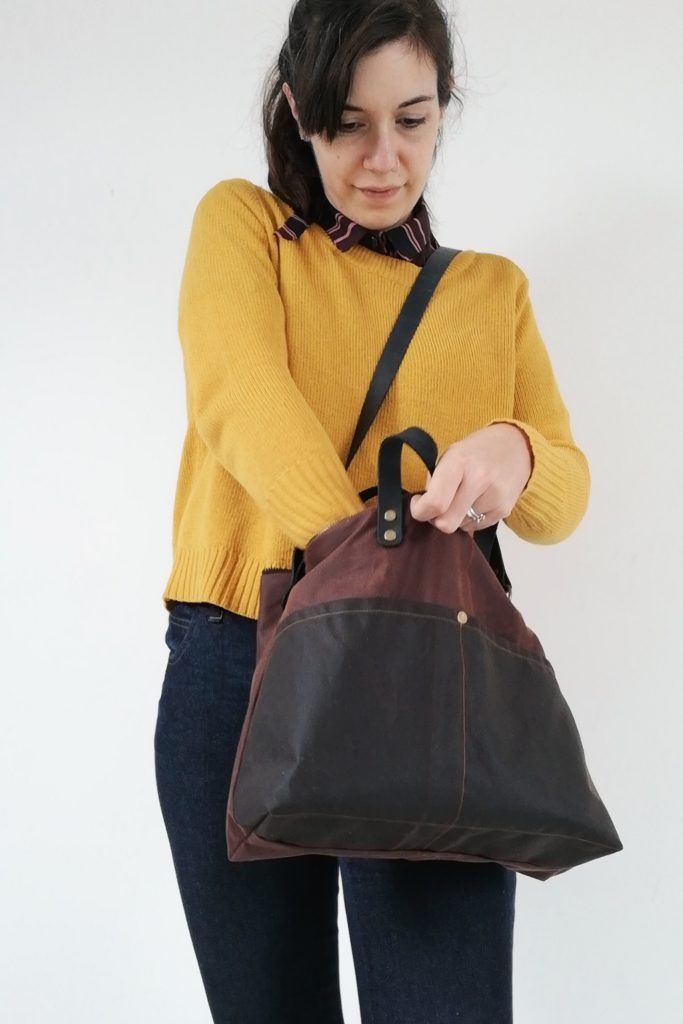 Look at that action shot! 😉

What about you, have you ever made a bag before? Smashed the crap out of some rivets before? And if not, what’s stopping you?