In the low countries, there’s a traveling fabric convention called Stoffen Spektakel (I guss you could translate it as “Fabric Festival” or “Fabric Spectacle”). Part of my trouble with getting started in sewing (or one of the excuses I make to myself) is my difficulty in figuring out where to buy fabric. I had no clue where any brick-and-mortar shops existed in Ghent for a long time, and when I finally found a few, and figured out their wacky business hours (I’m saving the “business hours in Belgium” rant for another day), I didn’t like being in the store, usually just me and shop owner, not knowing what I’m doing but not being comfortable just ambling around touching everything while the owner waited for me to express interest in buying something. It’s not like a giant Joann’s where I can wander around more anonymously. Then I found some online shops in Belgium and the Netherlands, but I worried about buying something without much experience in actually using fabrics. Plus, Dutch fabric terms don’t always play nice with Google Translate. Would I regret buying stuff that I couldn’t touch and see for myself?

The fabric fairs, held in giant convention centers and full of vendors, (there’s another called the Stoffen Cirkus that I’ve been to as well) provided a (mostly) perfect alternative. My Dutch only had to be decent enough to ask for one, two, or three meters and figure out the fabric names on the signs (having the Google Translate app on my phone helped, it can read and translate signs that are in Dutch!). They were always crowded and I could amble as much as I liked before making any decisions.

This is all to say that I bought a lot of fabric at the latest Stoffen Spektakel that came through Ghent recently. My goal was: stretchy stretchy stretchy, mostly solid colors, mostly fall and winter-appropriate colors, some wovens for specific projects, and a handful of notions. I was pretty successful, although I’m still without a seam gauge (mostly because of language shyness, I later ordered a “zoommeter” online) and I only came prepared with an empty backpack (other people had rolling suitcases, genius!). Since I had to carry several plastic bags with me, which I put down every time I needed my hands, I ended up leaving a bag behind somewhere in the convention center. Luckily it was only one bag with only one piece of fabric; it still sucks, but considering I had consolidated so many cuts into fewer bags, I’m glad it was only the one piece that was lost.

Leading up to the fair, I went through all of my patterns and tried to prioritize based on my wardrobe needs, my skills, and patterns I already had. I listed fabric lengths and types, any necessary notions, and ideas I had for colors and prints in a small notebook. I tried to keep it in my mind how any finished projects would fit into my wardrobe, so I didn’t want to buy too many colors that didn’t match or had clashing prints. I ended up buying a fair amount of neutrals, and colors that go easily with jeans or black leggings. And a few prints. 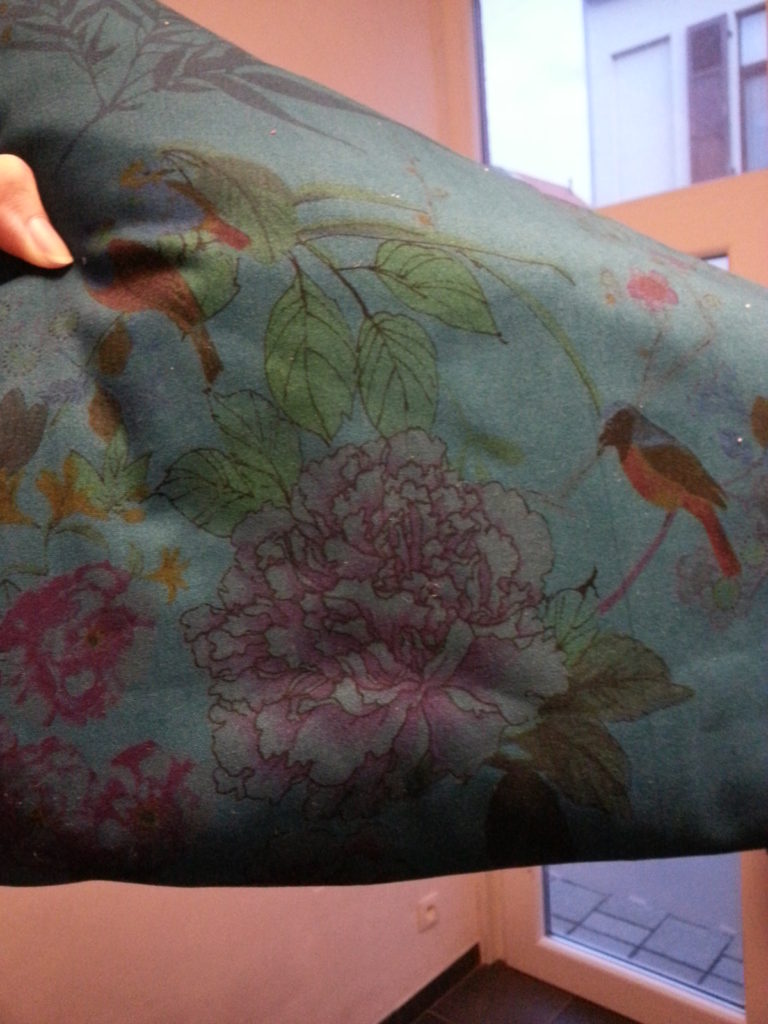 I got 4 meters of this lovely dark greenish blue fabric with a large flower and bird print. It’s woven, fairly thick, but still drapes nicely. It has the slightest bit of stretch. I only paid for 3 meters because the seller said he could see a discolored line on it. Umm, sure, totally, discount please! I’m imagining a Frida dress from Make My Lemonade (the version with the button placket), and I bought a gold belt loop, eyelets and buttons to match. 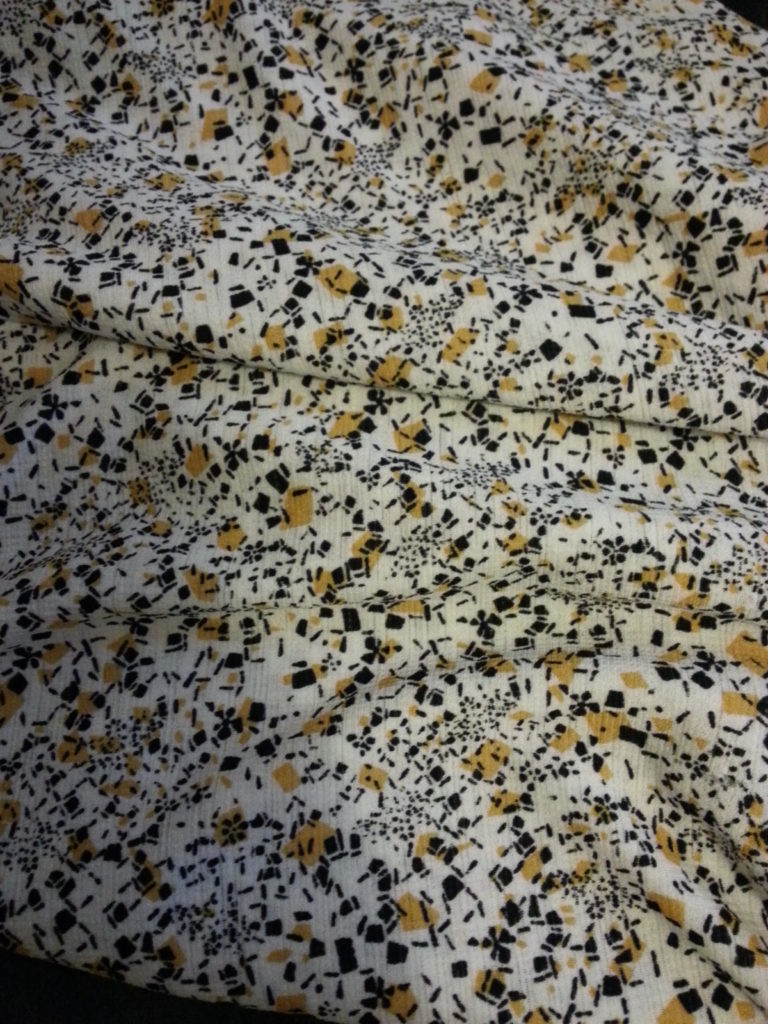 White with yellow and black speckles, a bit sheer, lightweight, and maybe viscose? I have no idea, it was in a pile of precut 1.5×1.5 meter pieces, with jersey, viscose and “other” all mixed together. It stretches and it has a bit of texture. I was thinking about this for an Alder shirt or a Harper blouse. Since I haven’t worked with sheer, lightweight fabrics before, I wanted something with texture so it wouldn’t be a slippery mess. 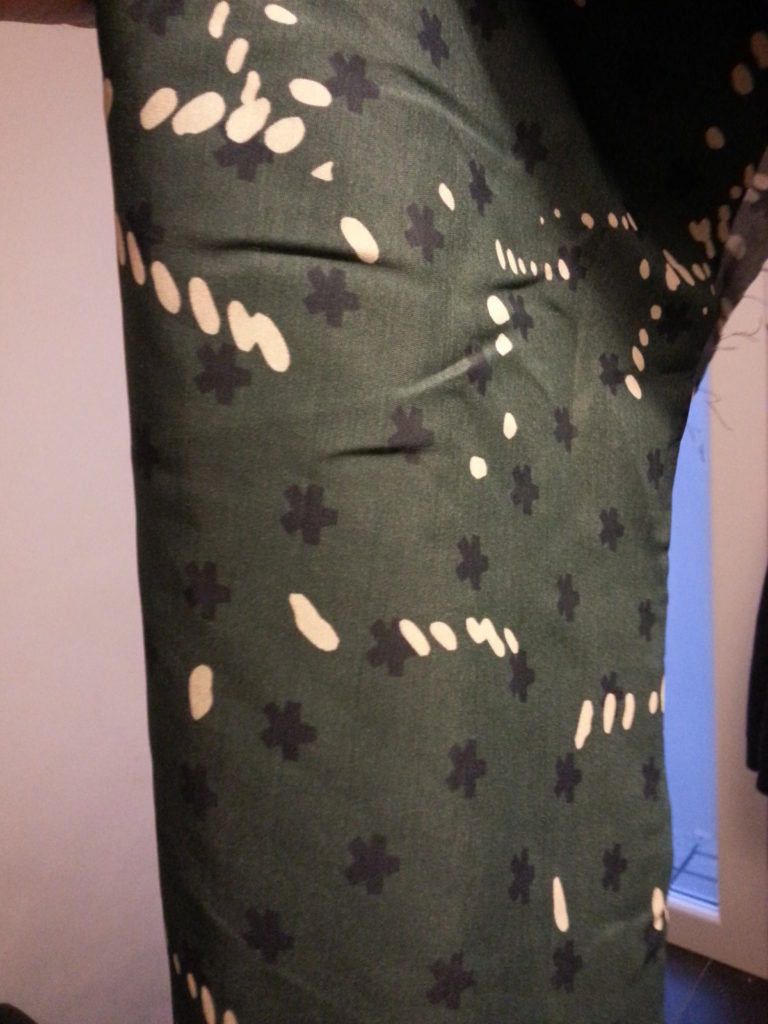 But, despite my intention to get sheer fabrics with texture, I was really drawn to this dark green fabric with black and beige splotches. It’s very sheer, also from the same pile of 1.5×1.5m precuts, with no stretch at all. I’m also thinking of an Alder (a shirt length of version B) or Harper shirt for this. 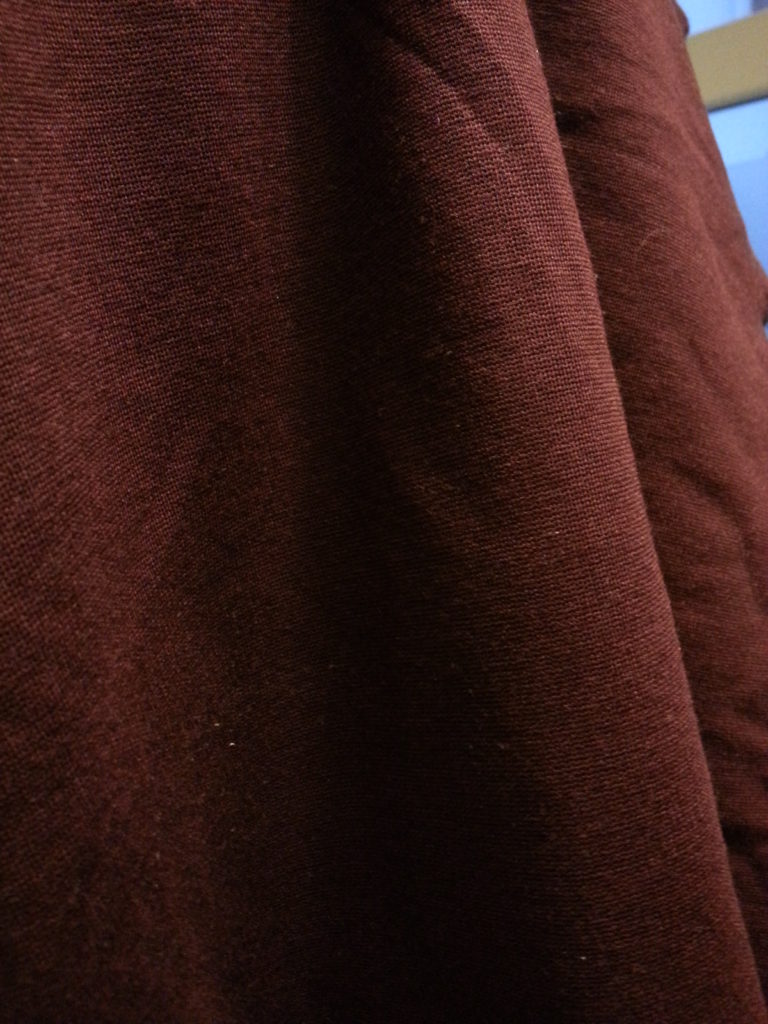 Burgundy ponte di roma (I only know that because it was labeled very clearly). I’m planning a Saiph tunic (version 2 with the ruffles). 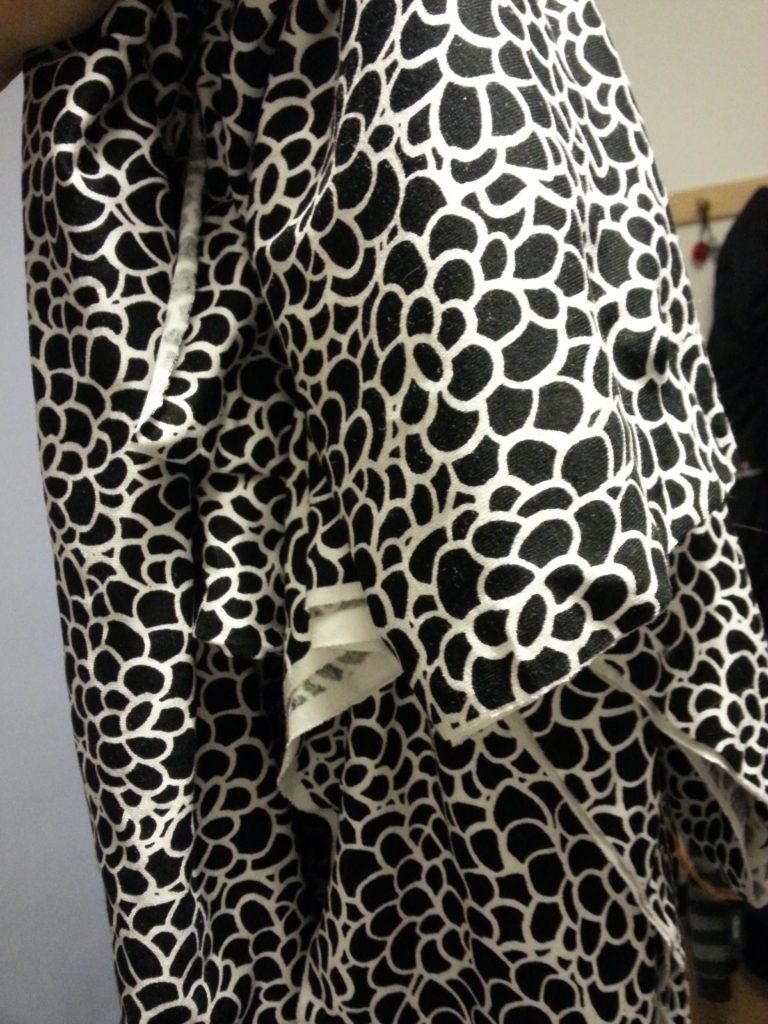 Black with an abstract white, allover floral pattern. It’s a really slippery knit with four-way stretch. I’m definitely going to make a dress out of this, probably the Amber maternity/nursing dress from Megan Nielsen (I bought it immediately when she emailed that the PDF was re-released!). 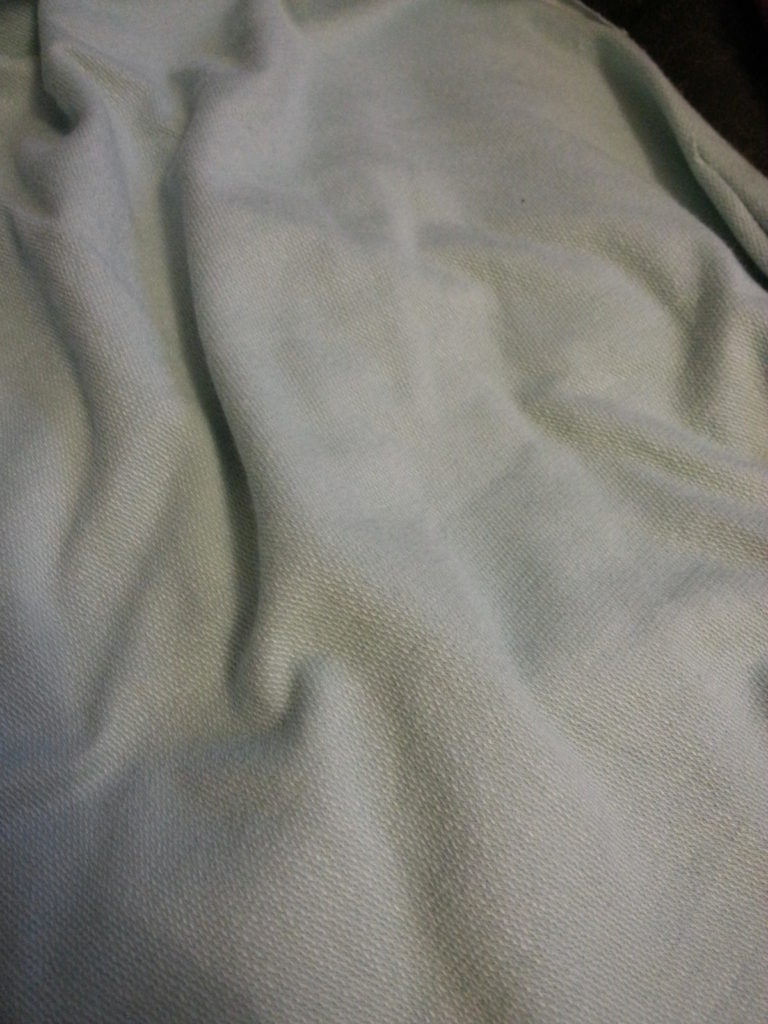 A light, mint-colored jersey. Maybe I’ll make another Agnes, maybe a Hemlock, or maybe a shirt version of the Amber maternity patter. It has decent four-way stretch. I like the color, but almost immediately questioned whether I’m the type to wear something so light. 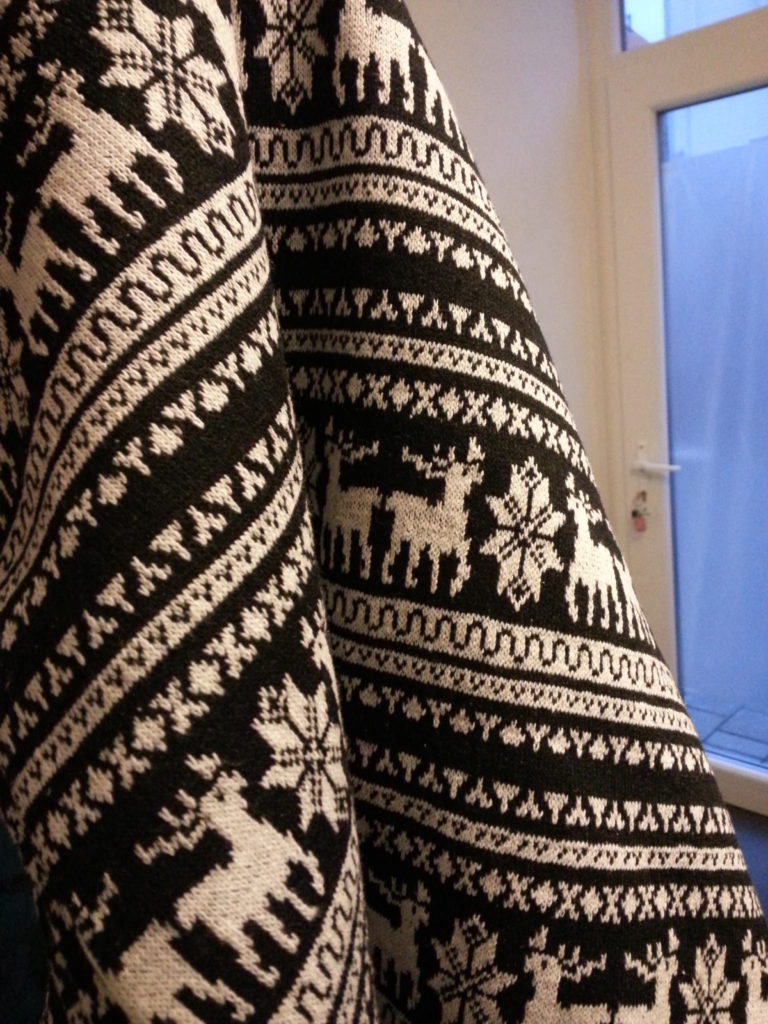 I’m really excited about this. Black and white sweater knit with reindeers! I keep seeing a blazer in my future for this. 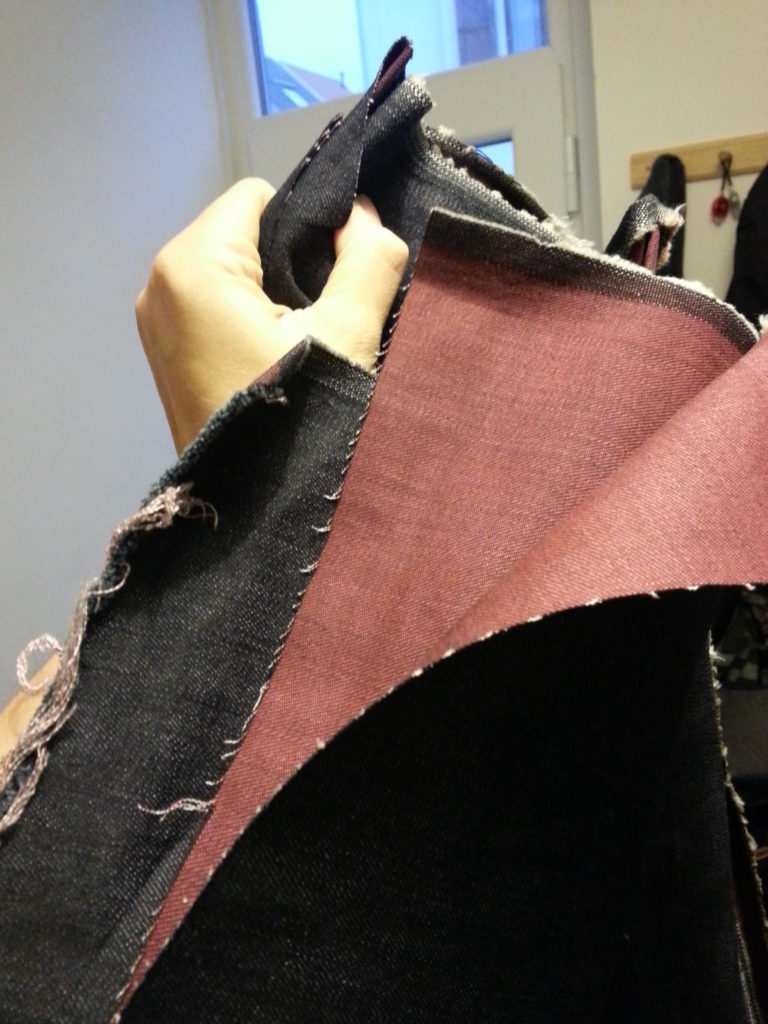 Stretch denim that’s dark blue on one side and burgundy on the other. If I can work up the nerve, these will become pants. Not jeans, but trousers more likely. I have the Emma pattern from Spit up and Stilettos. If I tackle them during the pregnancy, I’ll probably forego all fasteners and try to mimic this elastic waistband I saw on a pair of Asos maternity pants. 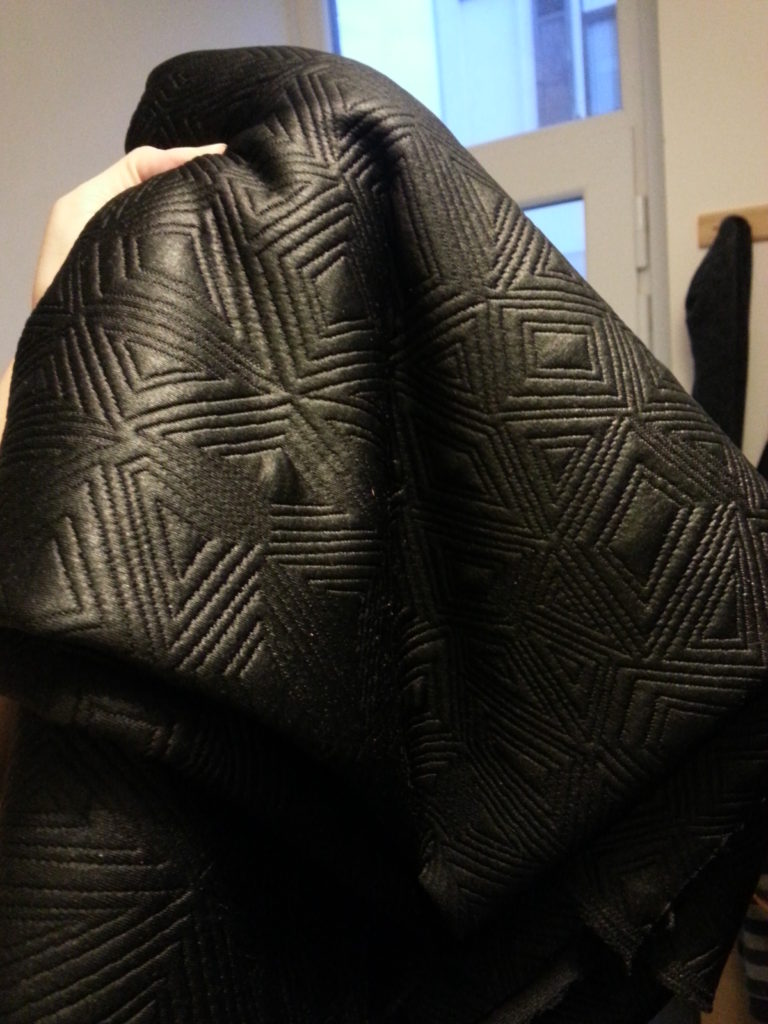 Another one I’m really excited about. I can’t decide if I’d rather have this textured black (slightly stretchy) fabric turn into a jacket (maybe a Mona from Make My Lemonade, I think the hardware plus the texture would look really cool!) or another Saiph tunic (my ideal Fall/Winter silhouette is tunics and shift dresses over tights/leggings with ankle boots). From the photo, it looks like it could be some sort of uncomfortable vinyl/pleather, but it’s a soft knit. 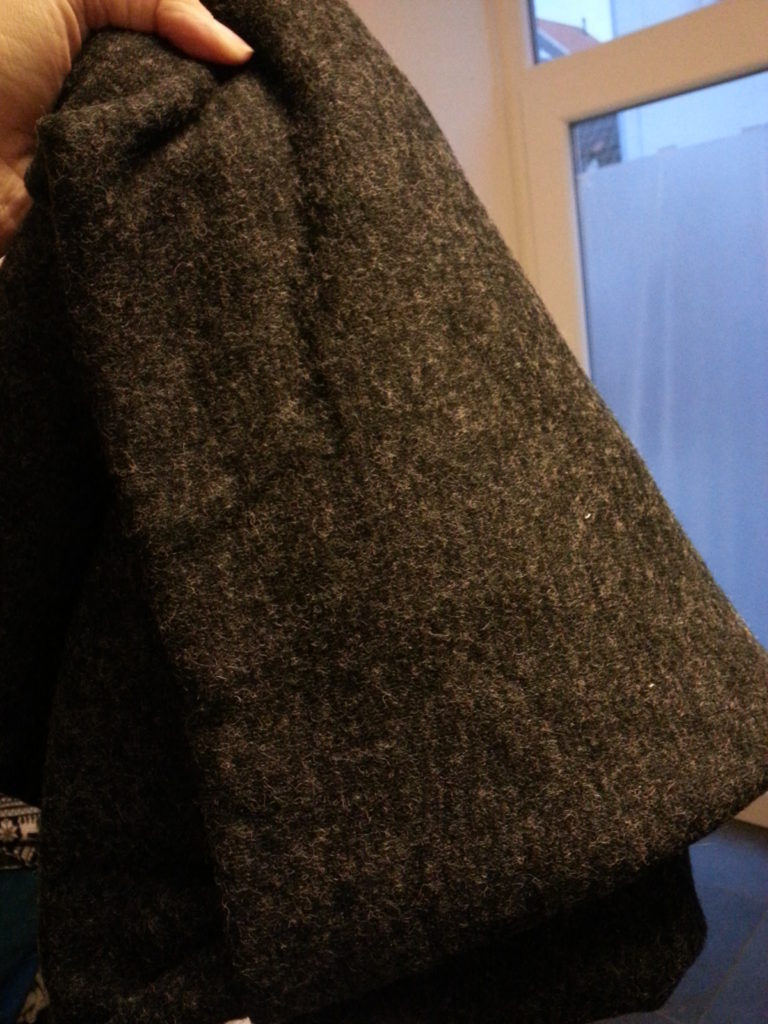 And a dark grey sweater knit. I originally had a wrap dress in mind for this (I love the look of the Olivia wrap dress from Named patterns, as well as everything in their new collection! Get in my liiiiife!), but rediscovering this tutorial for a wrap cardigan on DIY Maternity made me change course. The cardigan was made quicker than I could write this post.

Some fabrics I already have in my stash but haven’t cut into yet: 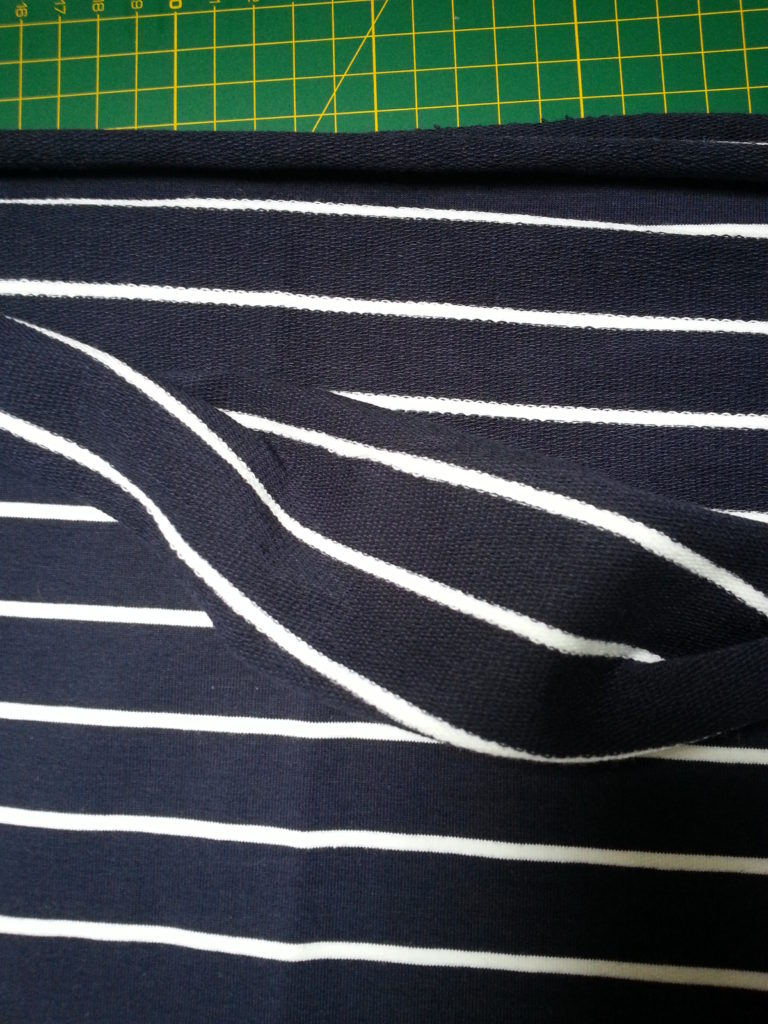 This navy and white striped fabric. It could be too thick for an Agnes (and I don’t think I have enough for an Agnes dress), but maybe a Luisa dress from Make My Lemonade? Belted and worn like a tunic, I think it could serve quite well through the end of the pregnancy. Or who knows, it could be a short-sleeved Hemlock or an Atalie top that I could wear over a high-waisted skirt.

No pictures, but I have a decent amount of white jersey, very very very pale pink jersey (that totally looked white in a dim fabric shop), and black jersey. Totally boring, but I plan on making lots of tops: every variation of the Agnes shirt pattern and maybe another (and another and another) Hemlock. I could also see the black fabric becoming a pencil skirt (with added belly room, using this tutorial from Cotton and Curls). 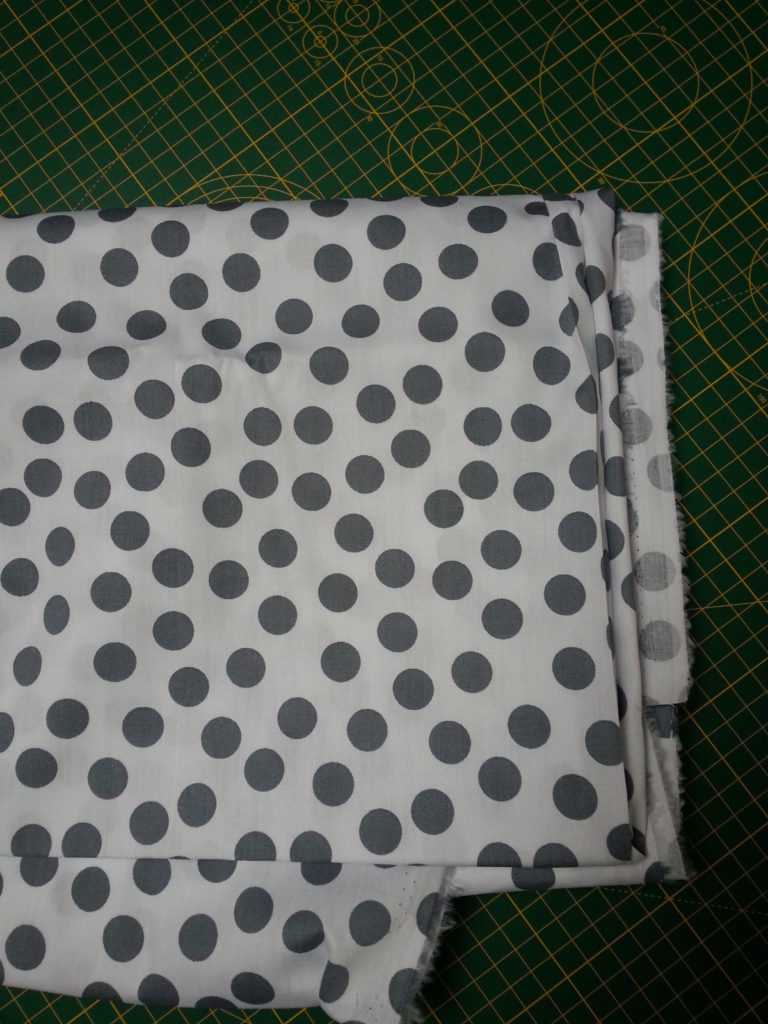 White sheer fabric with grey polka dots. I think it’s too sheer and too light to be anything other than a shirt. This was a very early purchase in my sewing journey, and now I’m not so jazzed about using it anymore. 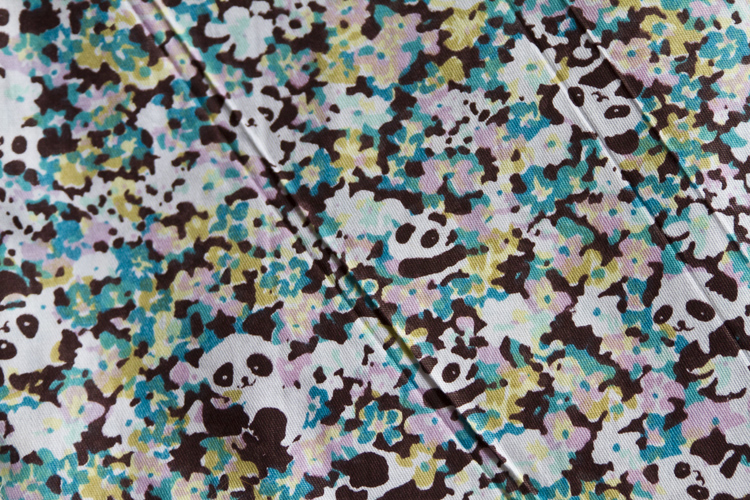 Fabric that I bought in Bishkek and still have a ton leftover. It was made into a dress that I loved for a long time. It’s a pastel floral pattern with pandas(!!!) hidden amongst it. The original dress ended up shrinking and fading pretty badly, but being without a dryer here in Belgium, I could at least avoid most of the shrinking. Maybe there’s another Frida dress in the future for this fabric (although I worry that the kitschy pattern could be overwhelming on such a voluminous dress).

Phew! I better get started if I want to have anything to wear in the coming months. I’m still trying to keep my expectations fairly low; each garment that I attempt is more about teaching myself new skills and hopefully getting something that’s wearable enough to see me through my pregnancy and maternity leave. Part of that is figuring out which fabrics work well for which sort of projects. If anybody has a similar link to peek into their stash, I’m so curious about what sort of fabrics other sewists have stored up, so please share!

2 thoughts on “F/W sewing plans, and a peek at my stash”