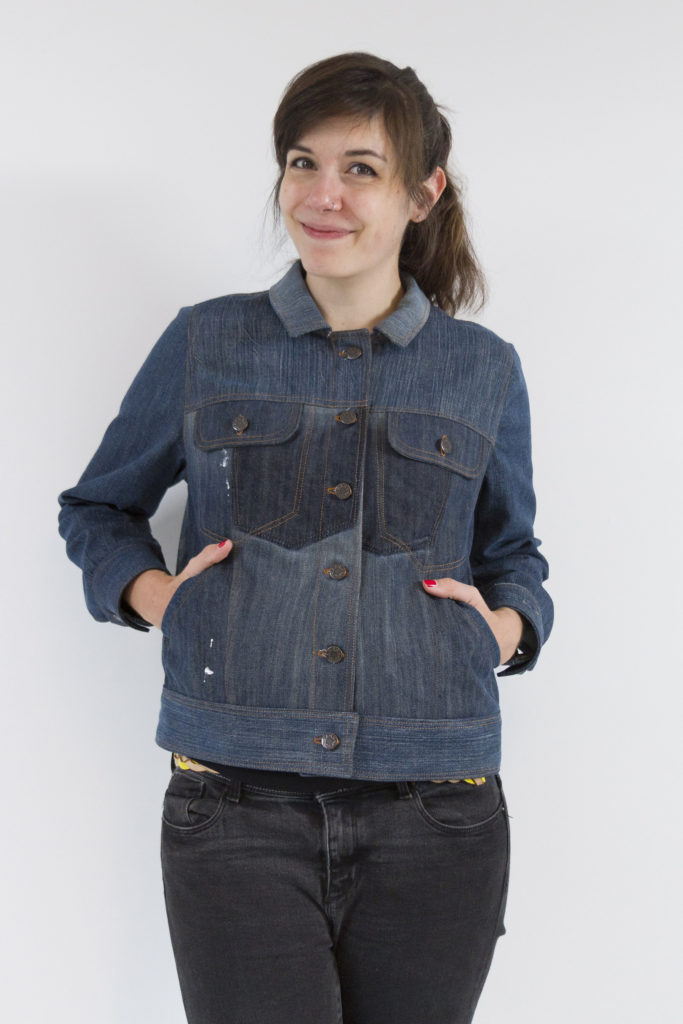 This project has been hanging over my head for so long! I am thrilled that it’s done and that it has already become a staple of my wardrobe. Honestly, guys, the relief is huge!

My husband wears through a lot of jeans, and when Named released the Maisa denim jacket pattern, advertising that it could be made specifically with old jeans, I had a total light bulb moment. I’ll use his old jeans to make a rad jacket for myself!

I bought the pattern (in April 2017 according to my Trello board) and I started hoarding  his jeans. Some were very torn apart, some were dripped with paint, but I saw the potential.

And then, apparently, I got distracted for a year and a half.

What held me up? I checked some blogs from other people who had made this pattern and there were warnings to acquire roomy jeans, or swap in some denim fabric, because some of the pattern pieces were too wide. My man is pretty skinny, so I imagined trying to get started and immediately realizing that I couldn’t even cut the dang thing out.

I also wanted to add side pockets… somehow. That idea kicked around in my head without really knowing how to achieve it. So both of these became these obstacles that prevented me from really moving forward with the project for many months. Several times, I had put this jacket on my monthly sewing planner, only to push it aside for something else. (does this sound familiar to anybody else?)

Anyway, one day I finally bit the bullet and laid out my pattern pieces and jeans. I had three pairs of average-sized jeans and it seemed like I could make it work!

A couple months later, I start researching welt pockets and trying out test versions. I’ve never sewn a welt pocket before, but I have a shorts pattern that includes one, so that was my starting point. It worked, but I was unhappy with how it looked on the inside, so I played around with altering the pattern pieces and the order of steps, until I was satisfied with the results. Then I sliced into my jacket pieces! 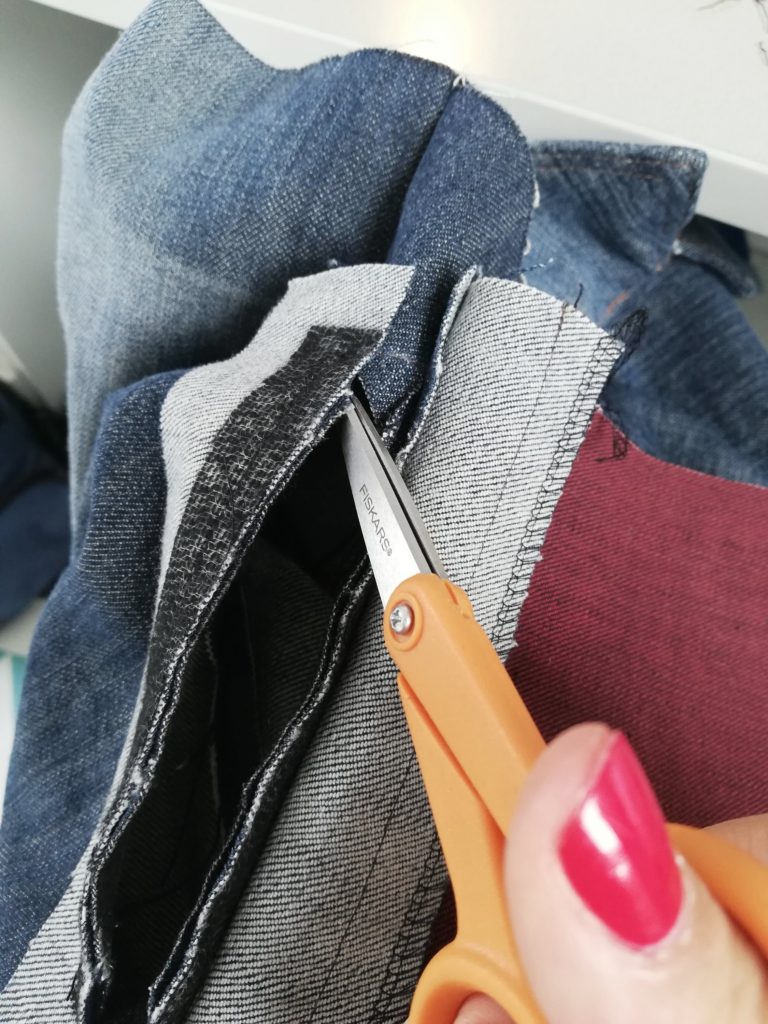 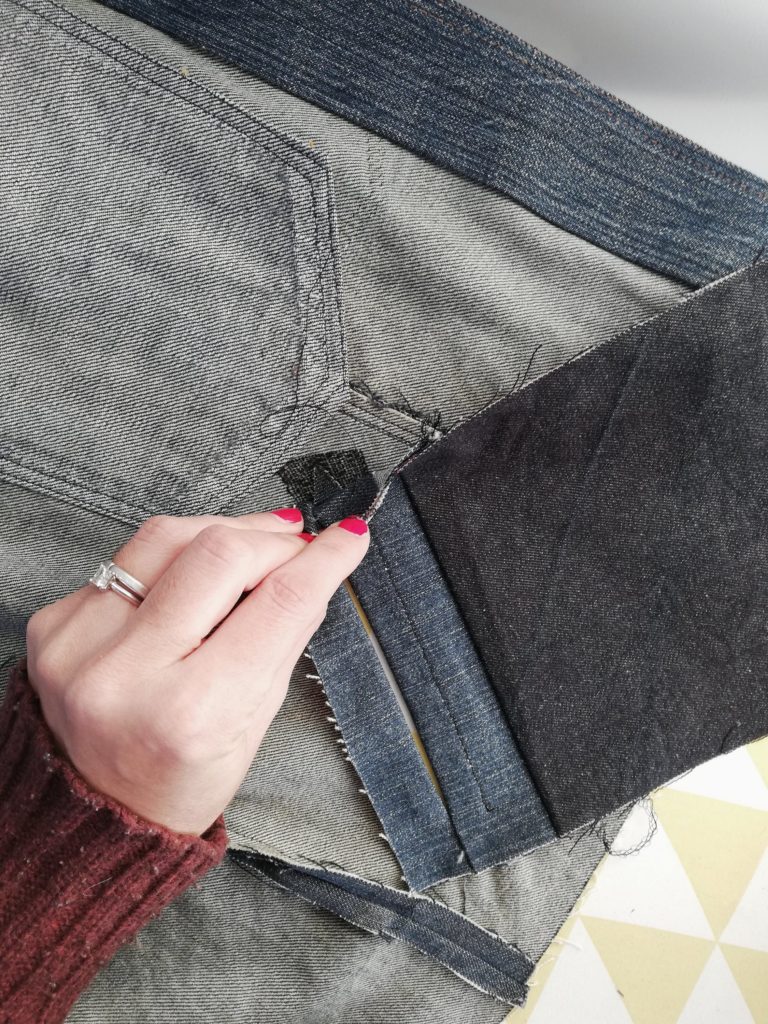 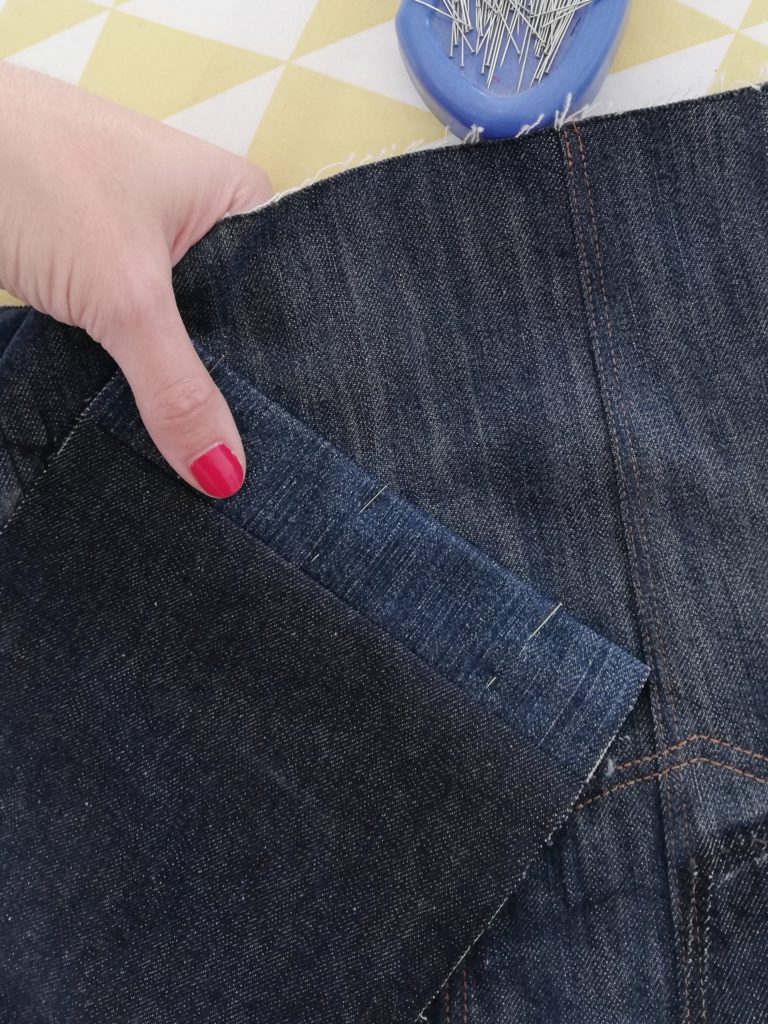 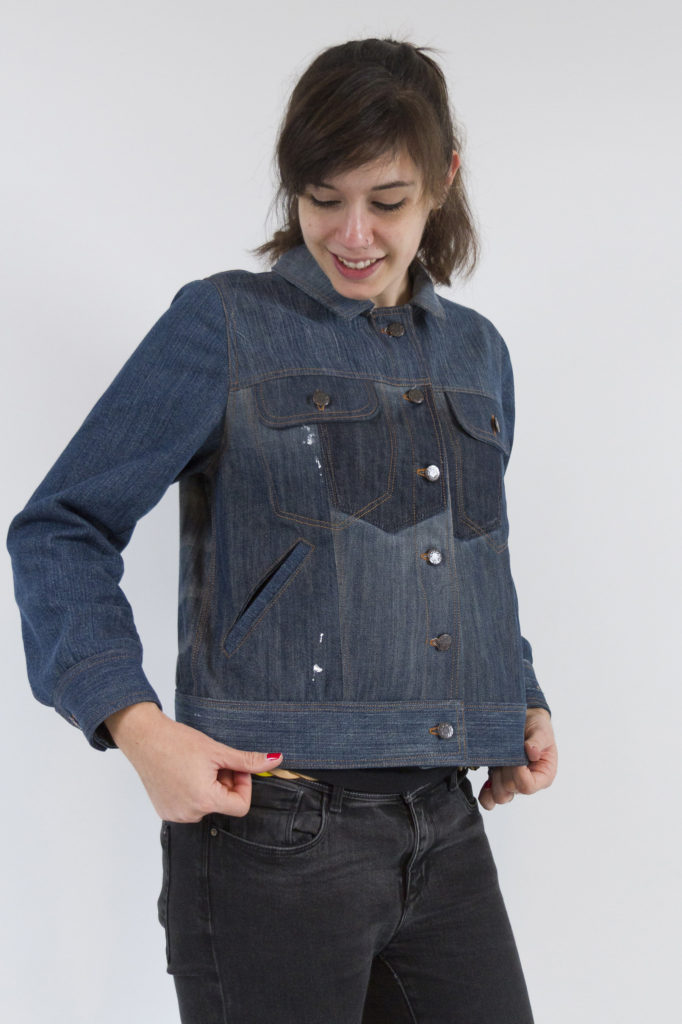 This is me going, “Thanks, it has pockets!!” 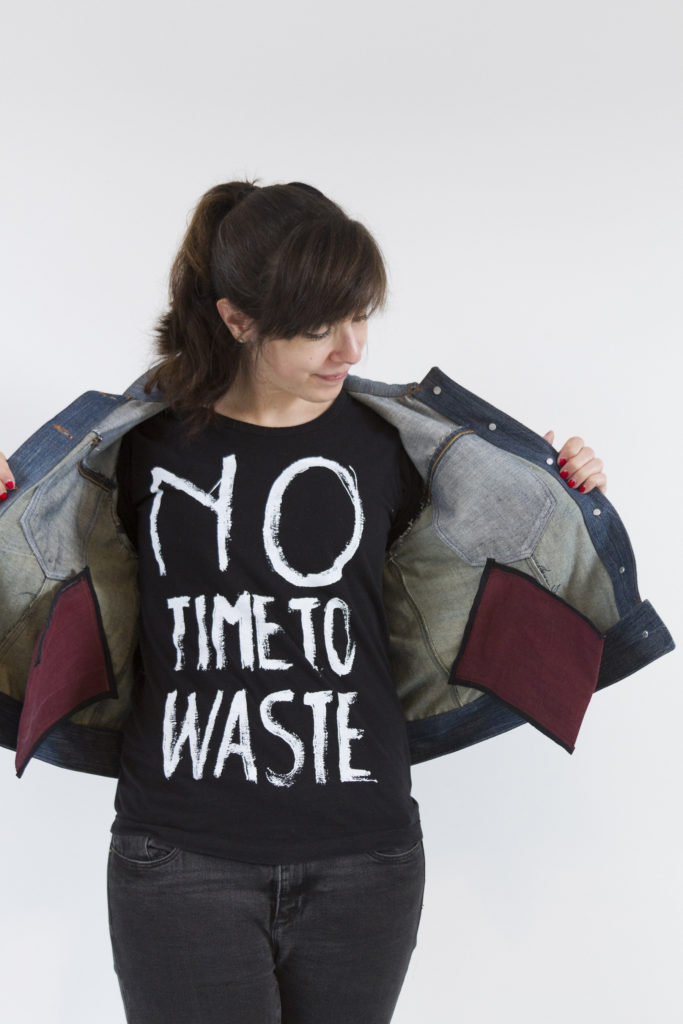 I’m happy with how the insides of the pockets came out; I used scrap pieces of stretch denim that were burgundy on the wrong side, and I bound the raw edges with other scraps I had. I like the pop of color inside!

…and then? Actually sewing the jacket. This is an involved project. I wasn’t particularly bothered by constantly switching between regular stitching and topstitching (I doubled up on regular thread instead of using topstitching thread), but it does definitely add time to the process. 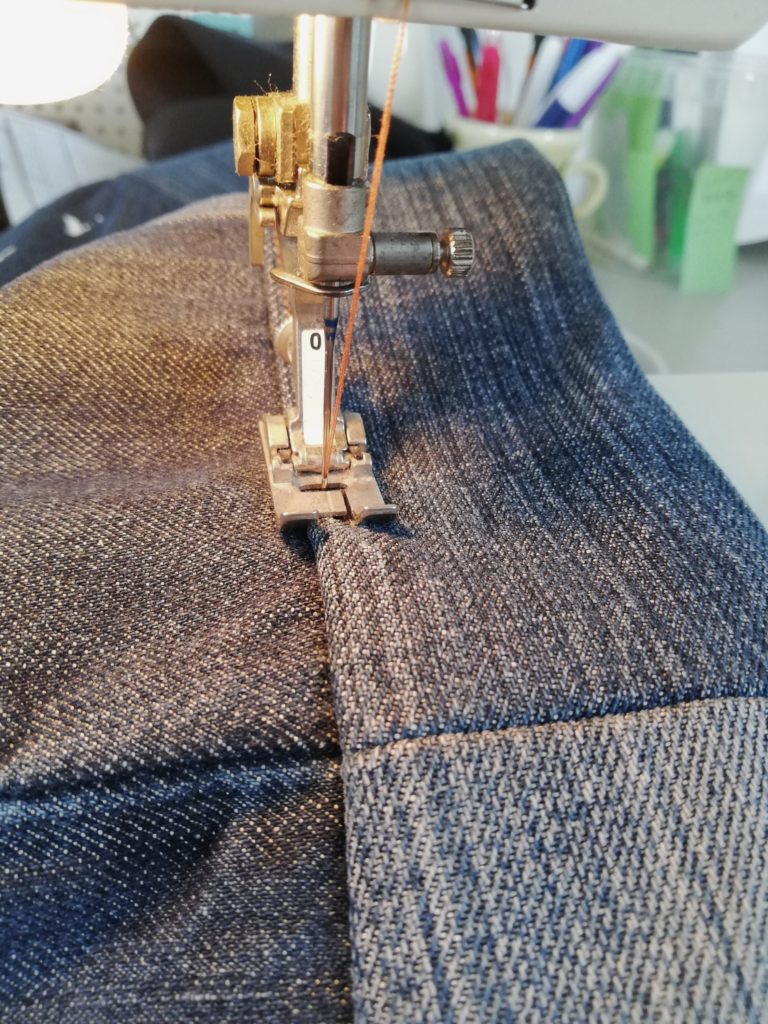 I did have a tough time with the collar, cuffs, and hem bands, maybe because my old denim pieces had stretched out, maybe because there’s a bunch of ease built in that’s hard to deal with on denim. The hem bands don’t quite line up with the fronts of the jacket, and the collar went a bit wonky on one side (although you can’t tell when the collar is down). The instructions tell you to let the hem band extend by 1-2mm (milli-meters) which is like… so tiny. With turn of cloth and my clumsy fingers, it didn’t turn out correctly. When I did the same with the cuffs, I aimed to line them up precisely, and that gave a cleaner look. Maybe my eyesight is off by a few millimeters? Otherwise, everything about constructing the jacket was straightforward.

I used gratuitous amounts of pins, wonder clips, and wonder tape for keeping seams lined up, and I’m glad I took the time to be (mostly) precise. 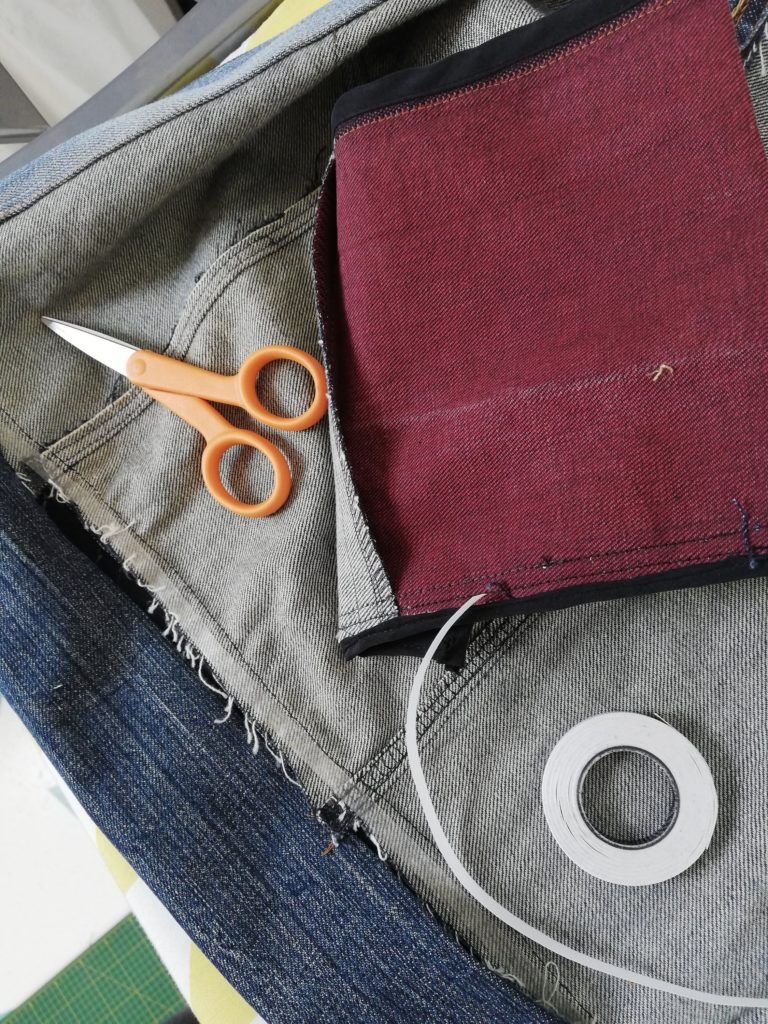 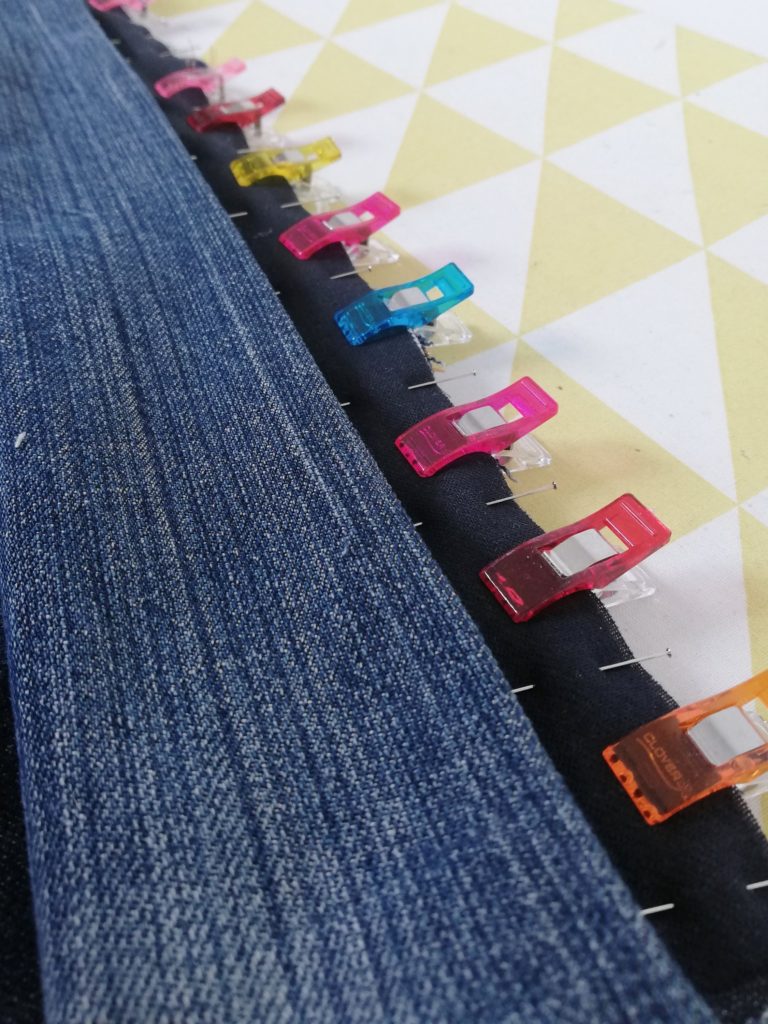 And the result is exactly what I wanted it to be. As soon as it was done, this jacket slipped seamlessly into my everyday wardrobe. The next day, I took it with me on a cross-continental holiday and it was on my body every single day during my trip. I cut the size 40 and it’s roomy enough to wear over a sweater, but doesn’t look too oversized over just a single layer. This is probably one of the most successful garments I’ve ever made myself and I couldn’t be happier with it!

Scroll down for a billion pictures of the finished jacket, I tried to show off all the different variations in shading and whiskering from the old jeans. 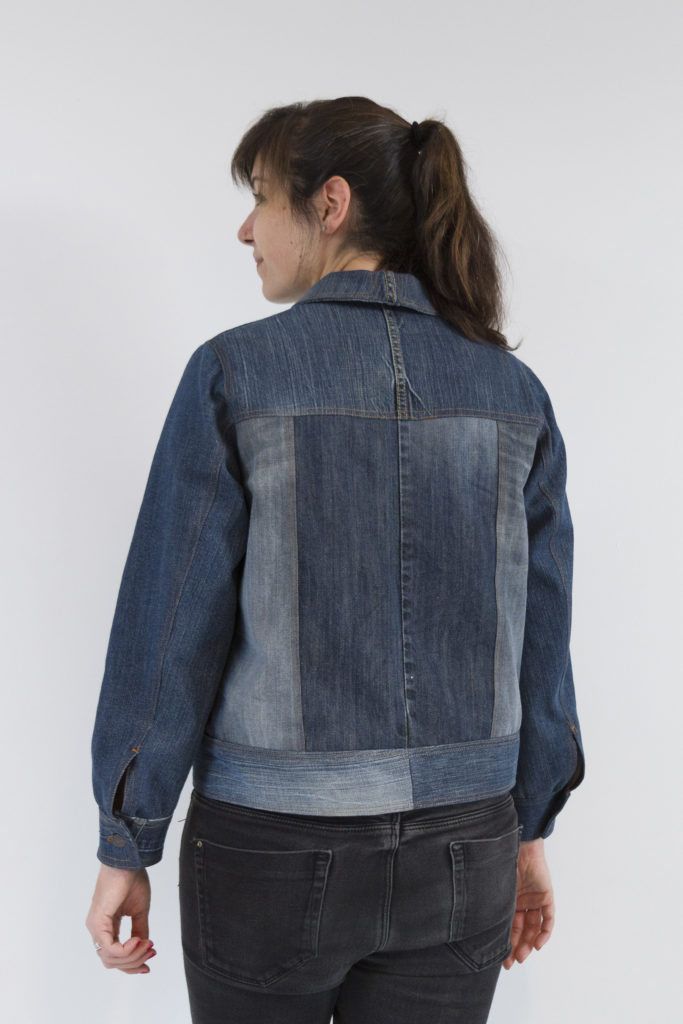 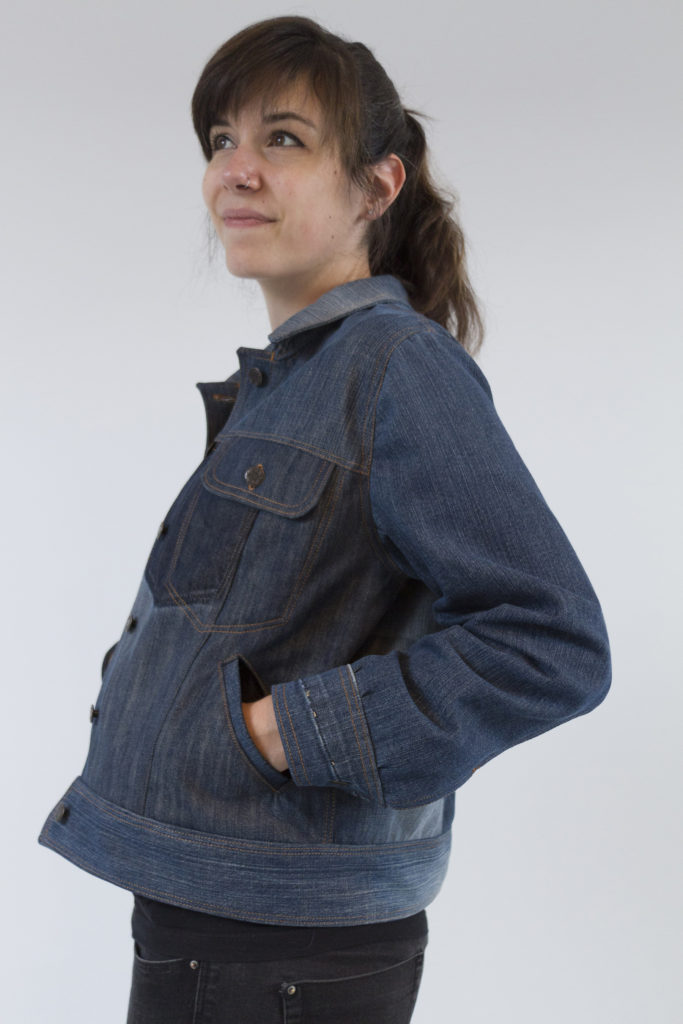 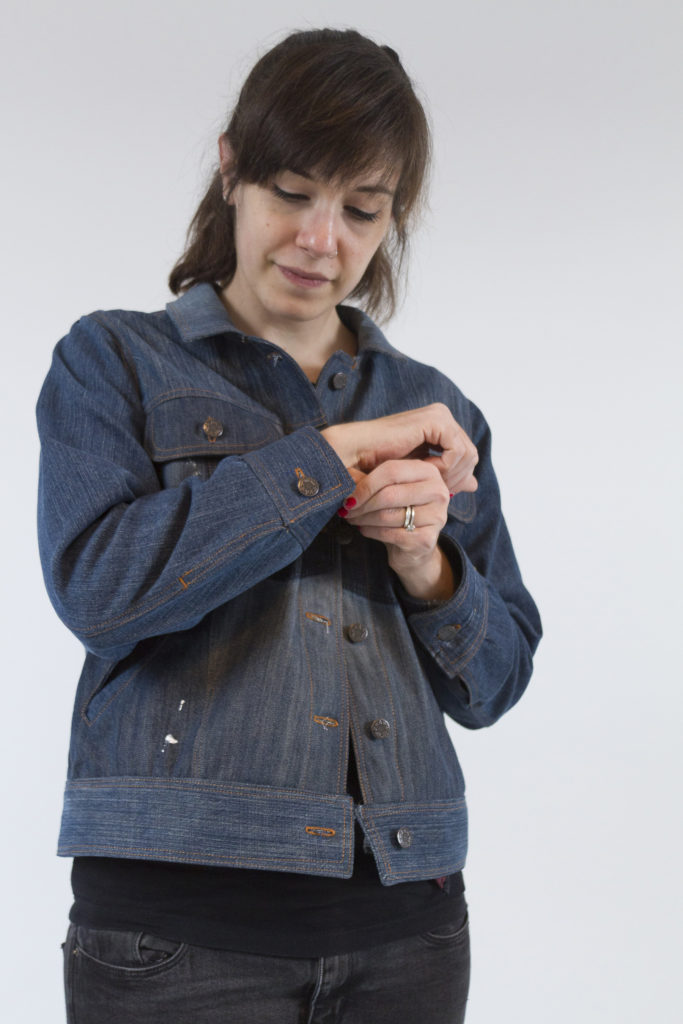 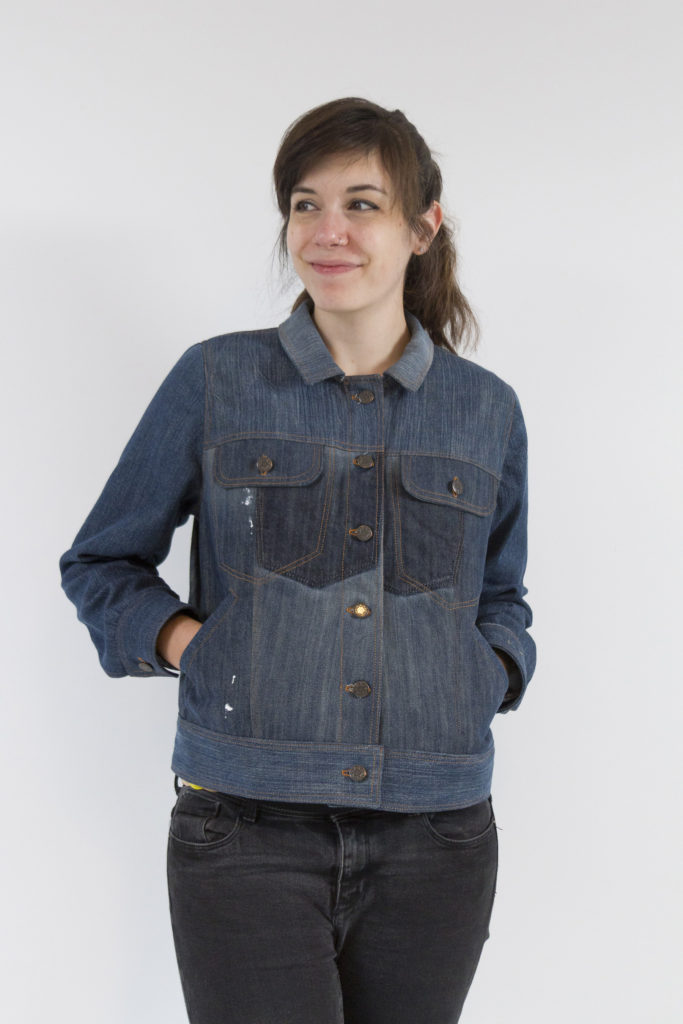 I’m smiling like a dork, but I don’t care! I love how this came out and I’m already thinking about a black, color-blocked, and/or sherpa-lined version for my next one (that I’ll get around to in another year-and-a-half).

What has been your most successful make, and why?