This was my first piece of handmade clothing, the Rae skirt from Sewaholic.

It’s still serving me quite well, it’s a simple skirt with an elastic waist and… that’s pretty much it. No pockets, no complicated details.

I initially went for the midi-length version, but I thought the shape ended up looking too wide at the bottom. Midi-length skirts seem to work really well on some ladies, but I don’t seem to be one of them (although I’ll keep trying!), so I cut a solid chunk off and re-hemmed it, and now I’m super pleased. My (pre-pregnancy) sizing went all over the place, but I probably could’ve ended up sewing a straight size 8; like I said, it reads a bit too wide for me.

The fabric is something I call “babushka paisley”. I bought it in Kyrgyzstan (where I lived for 3 years) in a large quantity (5 meters, if I remember correctly) for a very small price (probably the equivalent to €1/meter), to have a designer make a dress for me. She refused, because the fabric is typically used to make a tushuk, a large cushion that is popular in Kyrgyz households for sleeping or lounging. She said the fabric was too stiff, but one wash softened it up just fine. I’ve been using it as my practice fabric until I feel more comfortable hacking into the rest of my stash, even though I think this skirt turned out quite wearable. 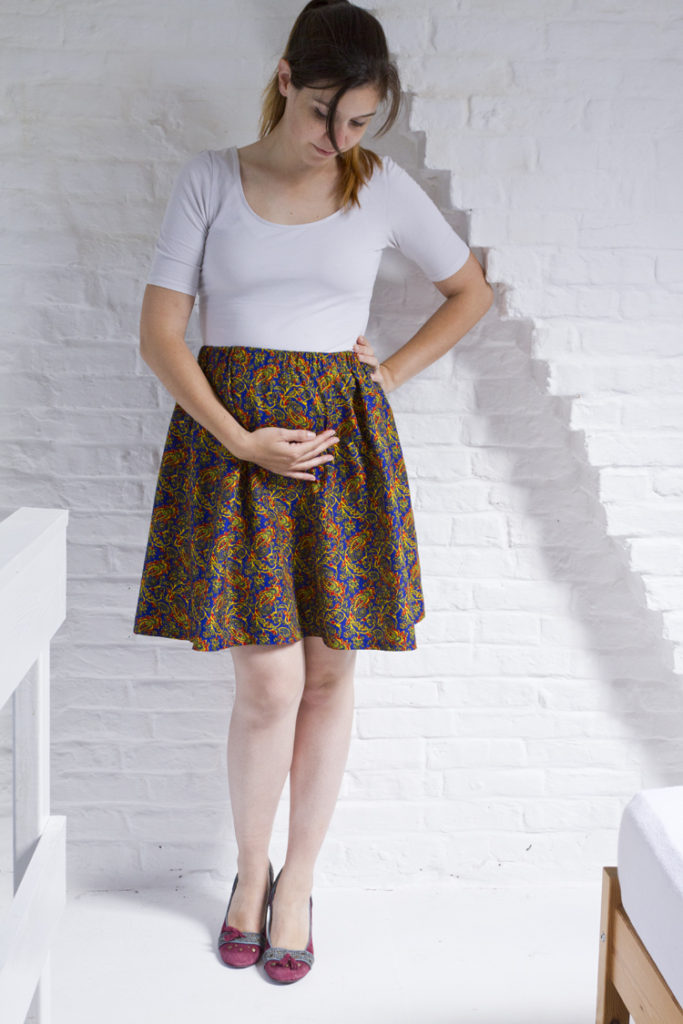 (Here I am cradling my 24-week bump; the skirt is still going strong, but bare legs are gone for the next 9 months.)

The pattern itself is super easy, great for an absolute beginner (like I was). I wish it had pockets though! I would maybe attempt to add some on a second version, except the skirt is made up of six panels, so there’s not really a side seam where it’s convenient to add them. But really, a woven skirt with an elastic waist, it’s hard to go wrong, and transitions seamlessly (har har) between normal and maternity wardrobes.