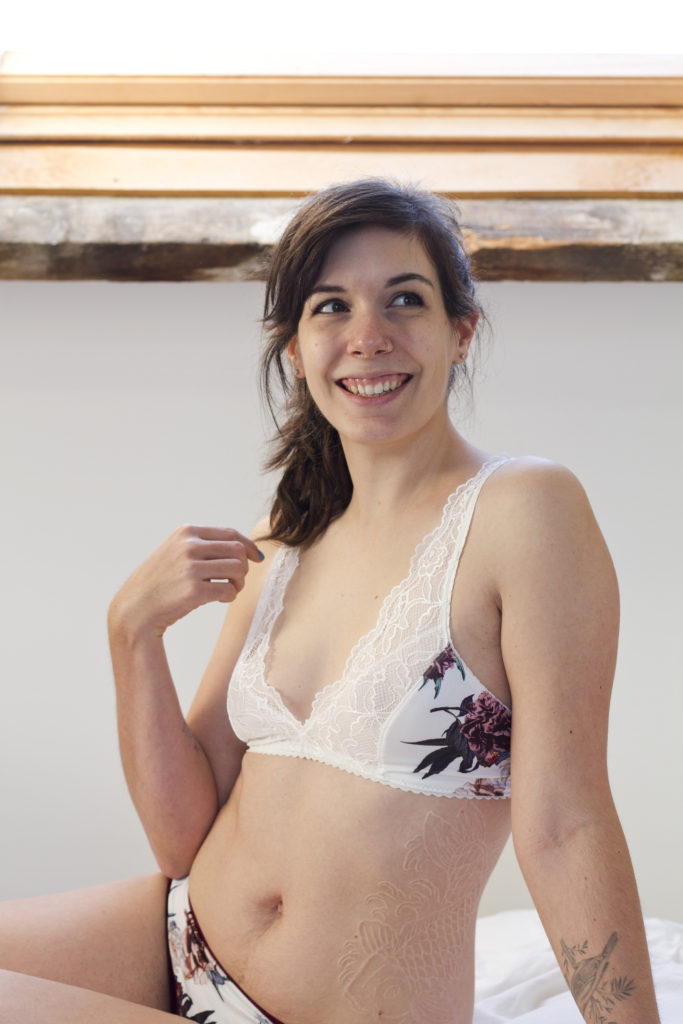 I mentioned in my November Plans video (and blog post) that I’m very much wanting (needing) new, pretty lingerie. In fact, if you’ve been reading this blog for a while, you’ll remember that it was part of my Make Nine 2018 to make pretty lingerie. Well, November is still part of 2018 and it coincided with this month’s Sew My Style patterns. No better time to get working on this goal!

For Sew My Style this month, the spotlight patterns were several from Evie La Luve, the Darcey and Willow bralettes, and the Binky and Frankie panties. I went with Darcey and Binky.

I ended up completing three (!!!) matching sets of bras and panties this month, using both the Evie La Luve patterns and others too, and I’m darn well pleased with this, not only for the finished garments, but also for some important lessons learned about sewing lingerie that I picked up along the way.

First lesson, bras are… hard. Okay, they’re not actually that hard, but it’s a very close-fitting garment, it’s a lot of unique curves to hug correctly, and they’re not really built to fit while you’re constructing them. So you can measure yourself, cut out the pattern, cut the fabric, and get through constructing the entire thing before you try it on and realize, oh dang. I could’ve used… 1/2″ more on the band. The difference between something that fits and something that you will never glance at again can be a very small measurement.

With that being said, I think I will end up wearing two out of the three bras I made, and I will probably come back to the third to see if I can fix it (or else just unpick the straps and make a new one).

Where I can remember, I’ve mentioned where I’ve bought certain materials. 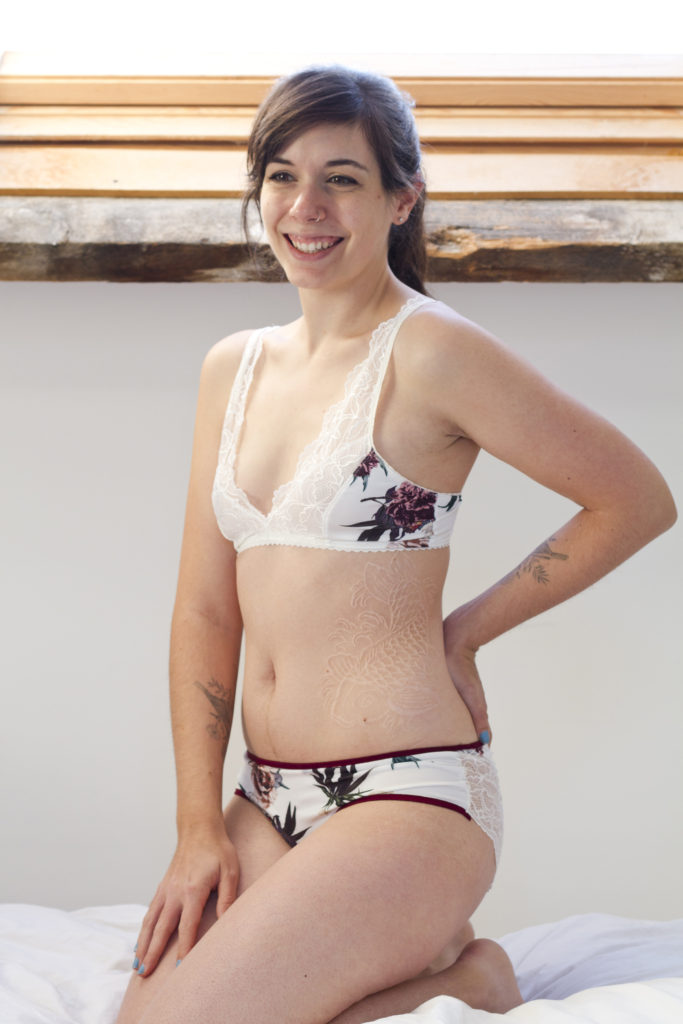 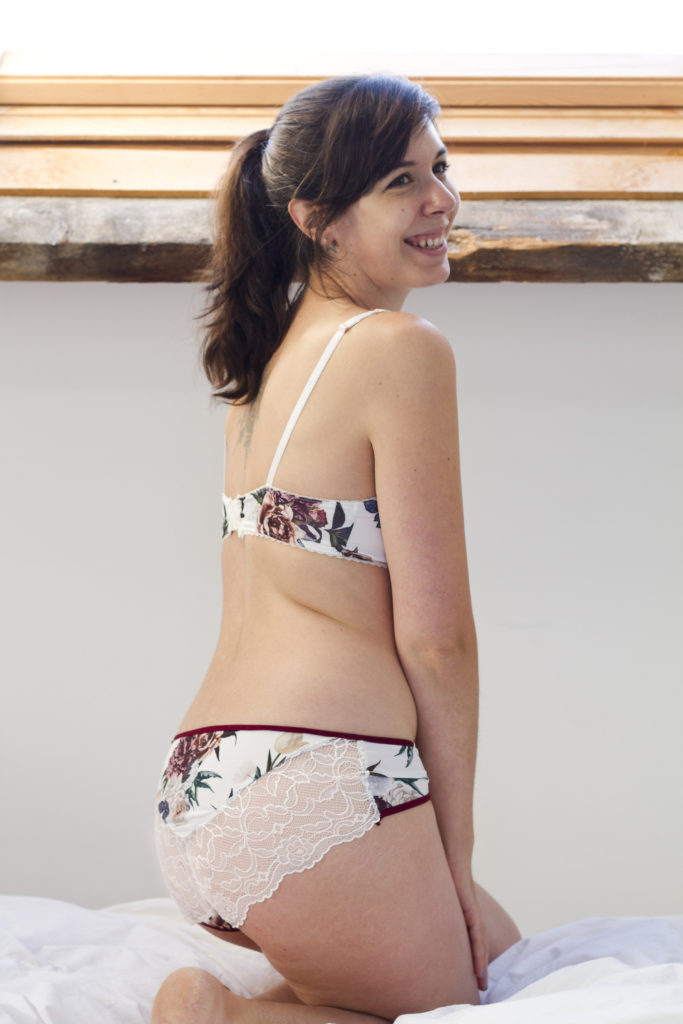 Patterns: Hanna bralette by Studio Costura, Binky panties (Style 3) by Evie La Luve. Most of the materials came from a bra kit I bought from Studio Costura.

I made a size Small in the Hanna bralette. I’m so pleased with how the bra came out, and I had an easy time going through Karu’s instructions. Something about how they’re written just clicked well for me, and I didn’t have too many sewing mishaps (I am a human, after all, so there’s always something to unpick). The bra came out a bit tight, but I think even if I had an extra row on the hook-and-eye, it would fit perfectly.

Using leftovers from the bra kit, with some burgundy fold-over elastic from my stash, I sewed up a size Large for the Binky panties. These also came out well, but I had the feeling that they were the teeeeeeniest bit too big, so I sliced off a bit from the pattern for future versions (maybe not my smartest move if you read on).

This set looks super adorable and feminine! The bra doesn’t work under some of my tops; anything with a wider neckline lets the lace peek through, but it’s not a big problem. I still have a ton of the floral fabric leftover from the kit, and might make another matching set with it. It’s super soft and comfortable to wear. 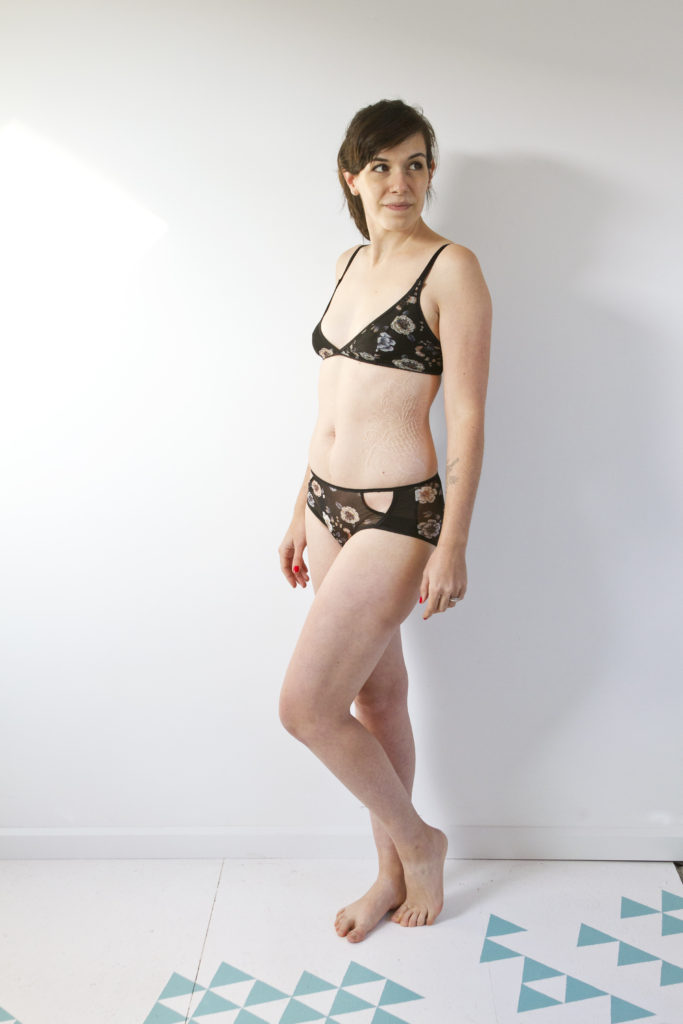 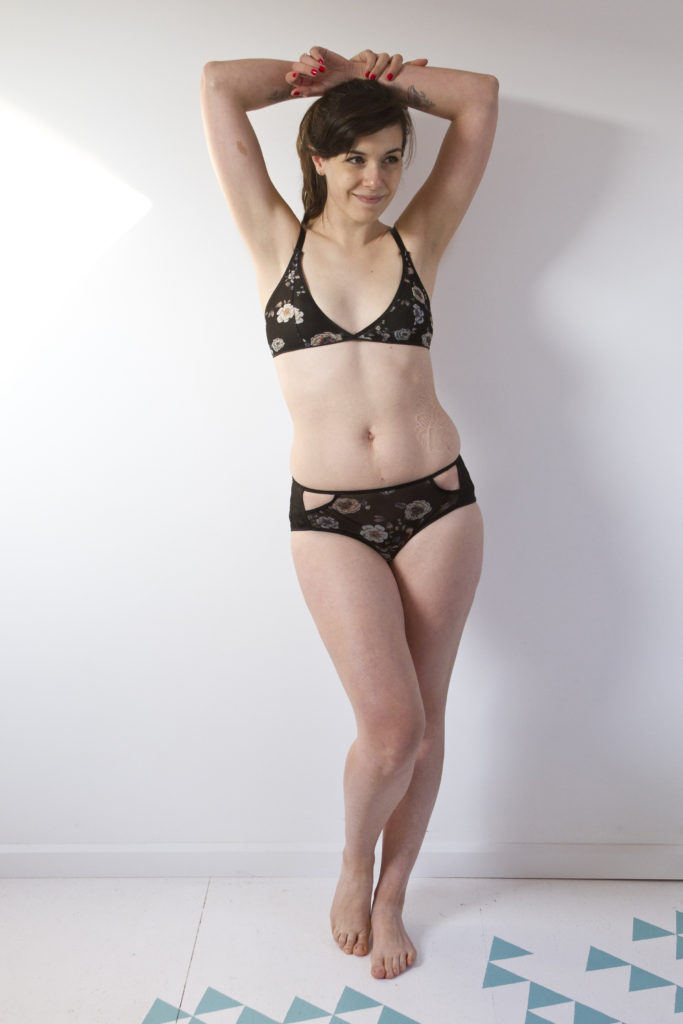 Hmm. So this is the bra that I might not end up wearing too often. Being a lady of *ahem* small bobbins, and knowing that the Darcy is drafted for a B-cup or C-cup, I wanted to test some alterations to reduce the cup volume. I watched a video tutorial that the designer posted on her Youtube channel to alter the curve of the cup patterns. Maybe I took too much off, or maybe it’s due to a couple other minor mistakes I made (adding length to the center back and then removing too much, over-stretching a too-small piece of elastic for the band, placing the straps too far apart on the back), but the cups have a tendency to umm… move where they’re not supposed to go.

The panties went together mostly fine, but they’re a bit tight and they didn’t have to be, if I was paying better attention. I noticed that with ELL’s patterns, we’re instructed to cut elastic that is shorter than the length of whatever we’re going to sew it to. Meaning, you’d have to stretch the elastic maybe 2-6cm as you’re sewing it. With other patterns, you’re often instructed to put light tension on the elastic as you sew it, so you’re stretching it a bit, but not really tugging so hard that you end up gathering the garment (or stretching out the elastic too much). Now, I charged ahead according to the instructions, but remember that I had altered my pattern slightly to be a bit smaller? Yeah, okay, and then I was cutting elastic even smaller than that. I applied FOE to the waist in this way, tried it on and realized I would have trouble getting it over my hips. It does fit, but I’m sure I’ll pop a seam someday. For the leg openings, and for the next pair I made, I measured pieces of FOE that exactly matched the length of the opening, and used a bit of tension when sewing. That ended up working a lot better.

It ended up looking quite okay in the photos though. I’m pretty enamored with the cut-outs of Style 4, and I think I’ll definitely make this pattern again. 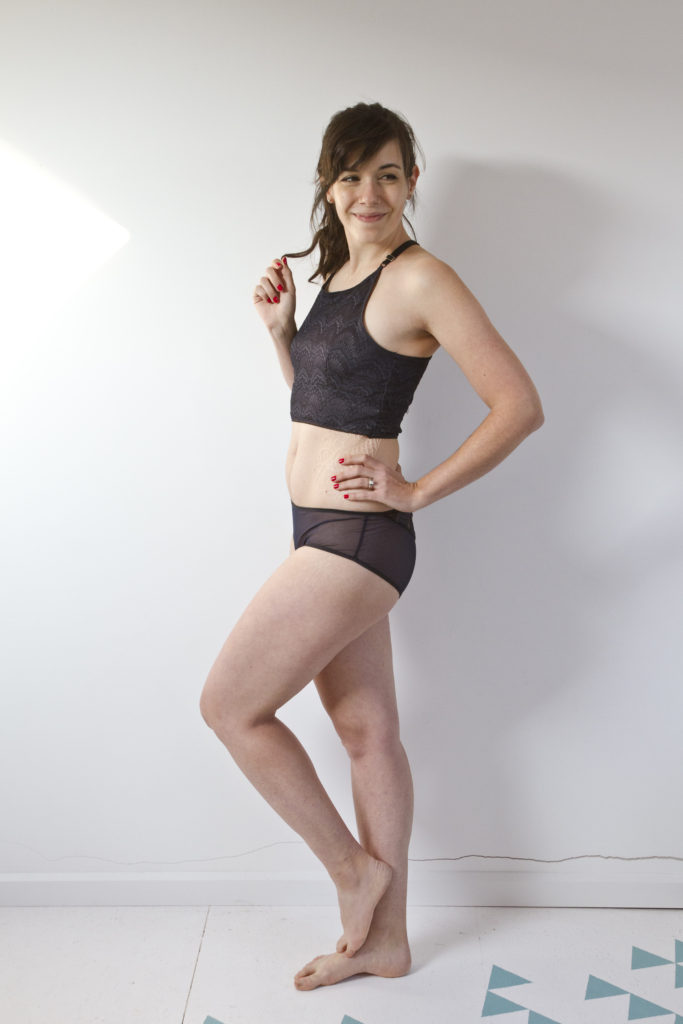 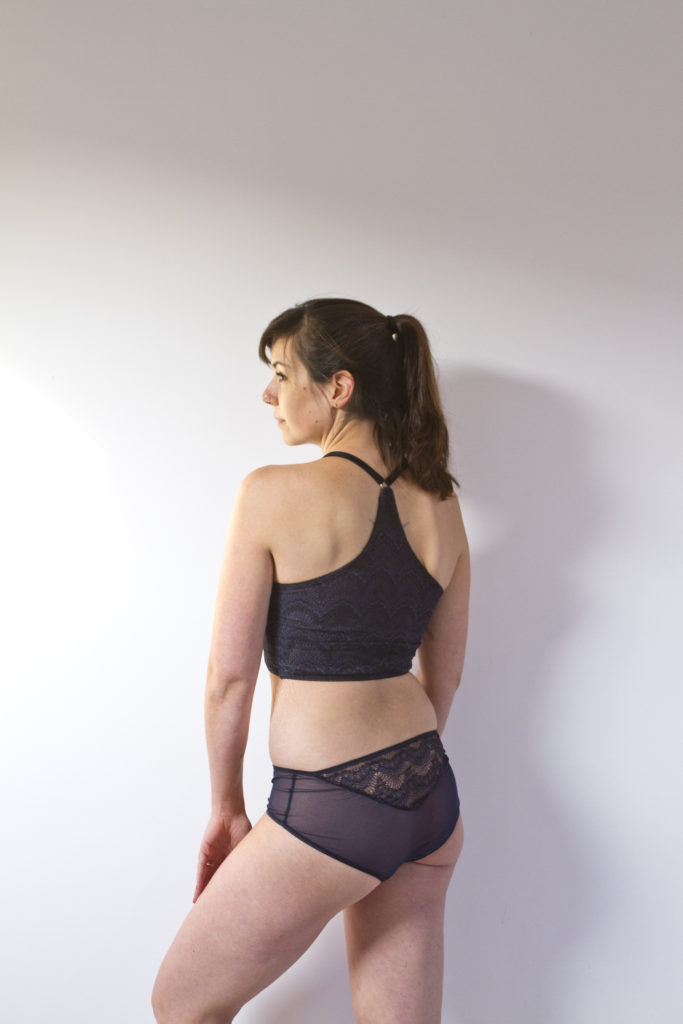 I had the Noelle bralette already cut out from some long ago burst of productivity. I’ve made another Madalynne pattern previously, the Sierra wrap bralette, and both versions I made ended up too small, even with alterations, so I overcompensated on this Noelle and cut a Large. Surprise! It came out so big! Like, baggy even. I tried cinching it in with smaller pieces of elastic and it looked awful! I almost trashed it, but then I tried it on and pinned away the ease, and looked at how that corresponded to the pattern. It nearly exactly matched a size Small (which is what my body measurements said I should make; hello, face-palm moment!). I cut apart the bra, trimmed it down to a Small, resewed it, and ta-da! This might be my new favorite bra!

I also mentioned in my November Plans video that I had to piece together the lace, using a zig-zag stitch, in order to fit the entire pattern piece. It worked perfectly! It blends in well, and I don’t notice any weakness with the fabric.

This was the last pair of Binkies that I made, and I wanted them to match this bra. Not having hardly any lace left, I took the “half-lace back” of Style 3, and switched the pieces that were meant for the lace and for the main fabric. I used a navy blue stretch mesh and my last bit of lace for that little peekaboo triangle. For this pair, I cut all elastic the same size as I measured the openings and I was much happier with the fit of these.

So overall, I’m incredibly pleased where this month of lingerie sewing has taken me. Plus, I had a blast during my little boudoir/selfie shoot! I’ll save a post on body positivity for another day, but nice lingerie definitely helps!